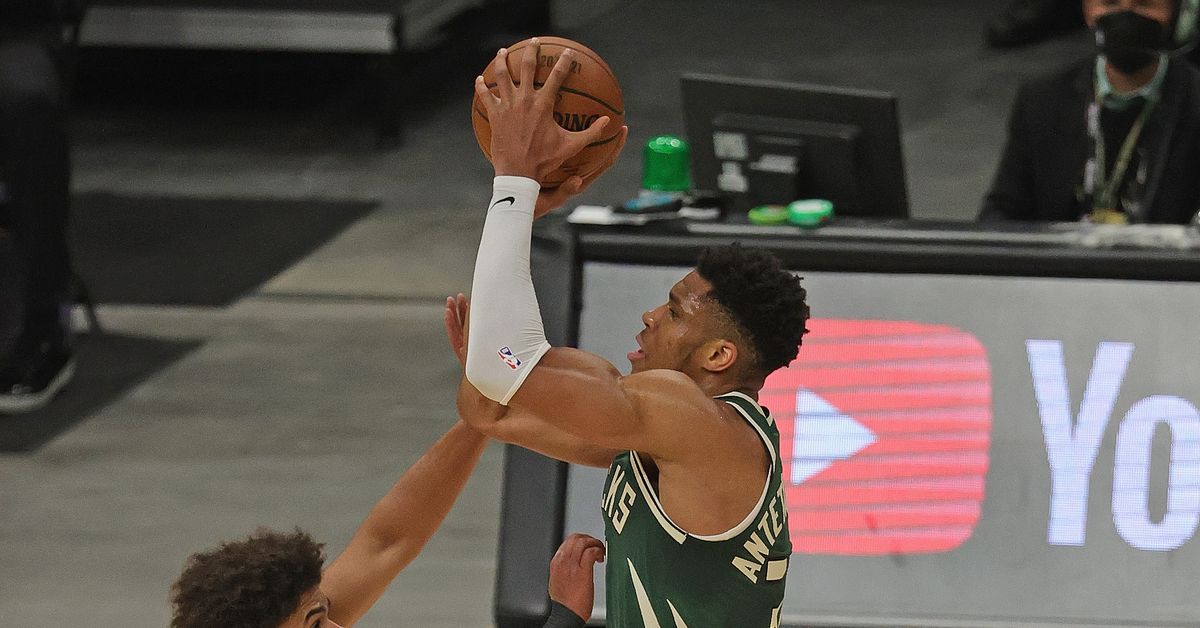 The Phoenix Suns and Milwaukee Bucks meet in a pivotal contest in Game 4 of the NBA Finals. If the Bucks win, the series returns to Phoenix tied 2-2 and becomes a best-of-3 contest. If the Suns win, they can close out the series at home Saturday in Game 5.

In this file, we’ll be tracking all the latest updates during the game, providing stats so you can keep an eye on your player prop bets. We’ll also keep an eye on the betting splits and how the public did against the books in Game 4.

End of the fourth quarter — The Bucks make enough key plays down the stretch to defeat the Suns in Game 4 109-103 and level the NBA Finals at 2-2. Middleton and Antetokounmpo combine for 66 points, with the latter having a massive block late to help the Bucks pull away. Booker finishes with 42 points but didn’t make some shots down the stretch in the loss.

The under hits for bettors, as did Milwaukee -4.5. A huge portion of bettors lost out taking the Suns on the moneyline. Booker hit his player prop for points, but missed all his three-point attempts. Antetokounmpo missed on his player prop, going under 34.5 points. Lopez hit the over on his player prop with 14 points.

Chris Paul struggled, shooting 4-12 and having five turnovers. Jrue Holiday was horrendous for most of the game going 4-20 from the field, but had a key offensive rebound late to secure another possession for Milwaukee.

Both teams hit seven threes, although the Bucks took six more attempts than the Suns. Milwaukee took 10 more free throws than Phoenix, making eight of those 10 shots. The Suns had 17 turnovers as a team to give the Bucks some easy transition opportunities.

The home team has won every game of the Finals, which has now become a best-of-3 series. Game 5 is in Phoenix Saturday at 9 p.m.

11:23 p.m. — It’s 95-94 Suns with 3:30 to play in Game 4. The under is looking great right now for the 24 percent of bettors who took that line. Booker could’ve been called for his sixth foul, but the officials didn’t blow the whistle. Antetokounmpo is up to 26 points and Middleton has 30. Pat Connaughton has been a solid contributor in 28 minutes, putting up eight points and more importantly grabbing nine rebounds. This has been the first close game of the series and it will go down to the wire.

11:12 p.m. — The Suns lead the Bucks 90-86 in what is setting up to be a wild finish to this game. Booker is still on the bench with 38 points and five fouls. Antetokounmpo is up to 22 points, while Middleton leads the Bucks with 28. Jrue Holiday has been really bad, going 4-17 from the floor so far and 0-4 from deep. Milwaukee as a team is 6-26 from behind the arc. The Suns have committed 15 turnovers, allowing the Bucks to stay in the contest. The over has some life, but bettors who took the under are still feeling good.

End of the third quarter: The Suns lead the Bucks 82-76 with Booker pouring in 38 points. The guard is 15-22 from the floor but is playing with four fouls. Middleton has 26 points for the Bucks and Antetokounmpo’s got 19 points, nine rebounds and six assists. The under is looking like the smart bet here. The popular player props for Lopez points and Booker points have already hit.

10:42 p.m. — Booker is up to 30 points, cashing in for bettors who took him to score over 27.5 points. He’s also picked up his third foul, making this a tough situation for Suns head coach Monty Williams who eventually decides to yank the star guard. Phoenix leads Milwaukee 65-62.

Halftime — The Suns and Bucks are tied 52-52 at halftime. Booker has 20 points at the break, making those who took him to go over 27.5 points happy. However, he is 0-2 from behind the arc which doesn’t bode well for bettors who took the over on him making more than 2.4 triples. Middleton leads the Bucks with 16 points. Antetokounmpo has 12 points, seven rebounds and four assists. Bettors who took the over on his 34.5 points will not have confidence at the moment. The over is back in play for the game after some late fireworks in the quarter.

9:53 p.m. — We’ve got a tie game at 33-33 with 6:50 to go in the half. Middleton has nine points and Antetokounmpo has eight. The Suns have six turnovers, a big reason why the Bucks have been able to tie up the contest. Bettors who took the under are feeling great.

End of the first quarter — The Suns lead the Bucks 23-20 after a rough first quarter offensively. Phoenix went 1-5 from behind the arc; Milwaukee shot 2-10 from distance. Antetokounmpo is 2-4 from the floor with four points. Booker is 3-7 with eight points to lead the Suns. Bettors who took the under are loving this score.

9:28 p.m. — The Bucks have cut into Phoenix’s lead, which now stands at 18-14. Jrue Holiday is 0-5 after performing well in Game 3. Khris Middleton is 3-8 with seven points. Giannis Antetokounmpo, who is being backed by a lot of bettors to top 34.5 points, has two points on one shot. Chris Paul has two turnovers and has been somewhat careless with his passes this evening. It’s been a weird start to Game 4.

9:15 p.m. — The Suns have jumped out to a 10-4 lead with Devin Booker starting 2-2 from the floor. The Bucks have missed three three-point shots early and are struggling to contain Phoenix’s drives. 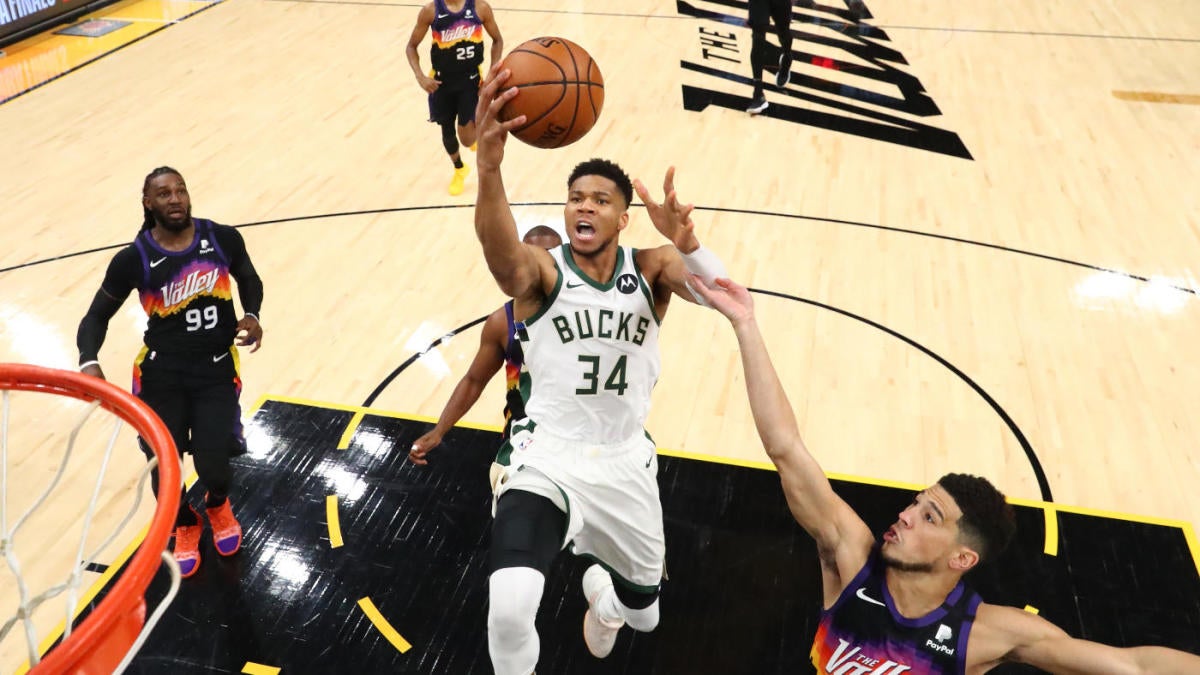 The eyes of the sports world will be on Fiserv Forum on Wednesday night. The venue hosts Game 4 of the 2021 NBA Finals between the Milwaukee Bucks and the Phoenix Suns. Phoenix won the first two games of the best-of-seven series at home, taking control of the proceedings. Milwaukee answered with a home win on Sunday, placing a great deal of emphasis on Game 4.

Tip-off is at 9 p.m. ET in Milwaukee. William Hill Sportsbook lists the Bucks as 4.5-point home favorites, while the over-under, or total number of points Vegas thinks will be scored, is 220.5 in the latest Bucks vs. Suns odds. Before making any Suns vs. Bucks picks or NBA Finals 2021 predictions, you need to see what SportsLine's advanced computer model has to say.

The SportsLine Projection Model simulates every NBA game 10,000 times and has returned almost $9,000 in profit on its top-rated NBA picks over the past two-plus seasons. The model is up almost $600 on its top-rated picks this season and entered the second week of the 2021 NBA Finals on a stunning 100-66 roll on top-rated NBA picks against the spread dating back to last season. Anyone following it has seen huge returns.

Now, the model has locked in its Bucks vs. Suns picks and predictions for Game 4 of the NBA Finals 2021. You can head to SportsLine now to see its picks. Now, here are several NBA odds and betting trends for Suns vs. Bucks:

Why the Suns can cover

Phoenix has tremendous talent and, while Giannis Antetokounmpo may be the biggest star, the Suns can attack the opposition in myriad ways. Devin Booker leads the way from a scoring standpoint, putting up 26.3 points, 6.1 rebounds and 4.7 assists per game in the playoffs. Though he struggled in Game 3, Booker is resilient and the Bucks don't have fantastic answers for his abilities. Chris Paul has been tremendous in the 2021 NBA Finals, averaging 24.7 points and 8.7 assists per game, and he has advantages in the pick-and-roll against Milwaukee's drop coverage.

Deandre Ayton was dominant in Game 3 before foul trouble sidelined him, and he is putting up 16.7 points and 13.0 rebounds per contest. Moreover, Phoenix is the deeper team, and the Suns can count on shooting and defense from supporting pieces like Mikal Bridges and Jae Crowder, who allow the Suns to unlock small-ball lineups that can be effective against the bigger team in Milwaukee.

Why the Bucks can cover

Even with the Bucks trailing 2-1, Antetokounmpo is the story of the series right now. The two-time NBA MVP exploded for 41 points, 13 rebounds and six assists in Game 3, dominating the proceedings. With that performance as part of his overall profile, Antetokounmpo is averaging 34.3 points, 14.0 rebounds and 4.7 assists per game, all while contributing his high-level defense on the other end.

However, Antetokounmpo's dominance was accompanied by tremendous supporting play in Game 3, which led to a winning formula. Jrue Holiday broke out of a slump with 21 points and nine assists, and the Bucks received considerable contributions from players like Bobby Portis and Pat Connaughton. From there, Khris Middleton is a top-level shot-maker, as evidenced by his per-game averages of 22.8 points, 7.8 rebounds and 5.2 assists in the playoffs. Overall, the Bucks are a tremendous two-way team and their talent level was on full display in what was a dominant Game 3 win in their own backyard.

How to make Bucks vs. Suns picks

SportsLine's model is leaning under on the total, with the team combining for 218 points in the simulations. The model also says one side of the spread hits well over 50 percent of the time. You can only get this pick at SportsLine.

So who wins Bucks vs Suns? And which side of the spread hits well over 50 percent of the time? Visit SportsLine now to find out which side of the Suns vs Bucks spread you need to jump on, all from the model that has crushed its NBA picks, and find out.