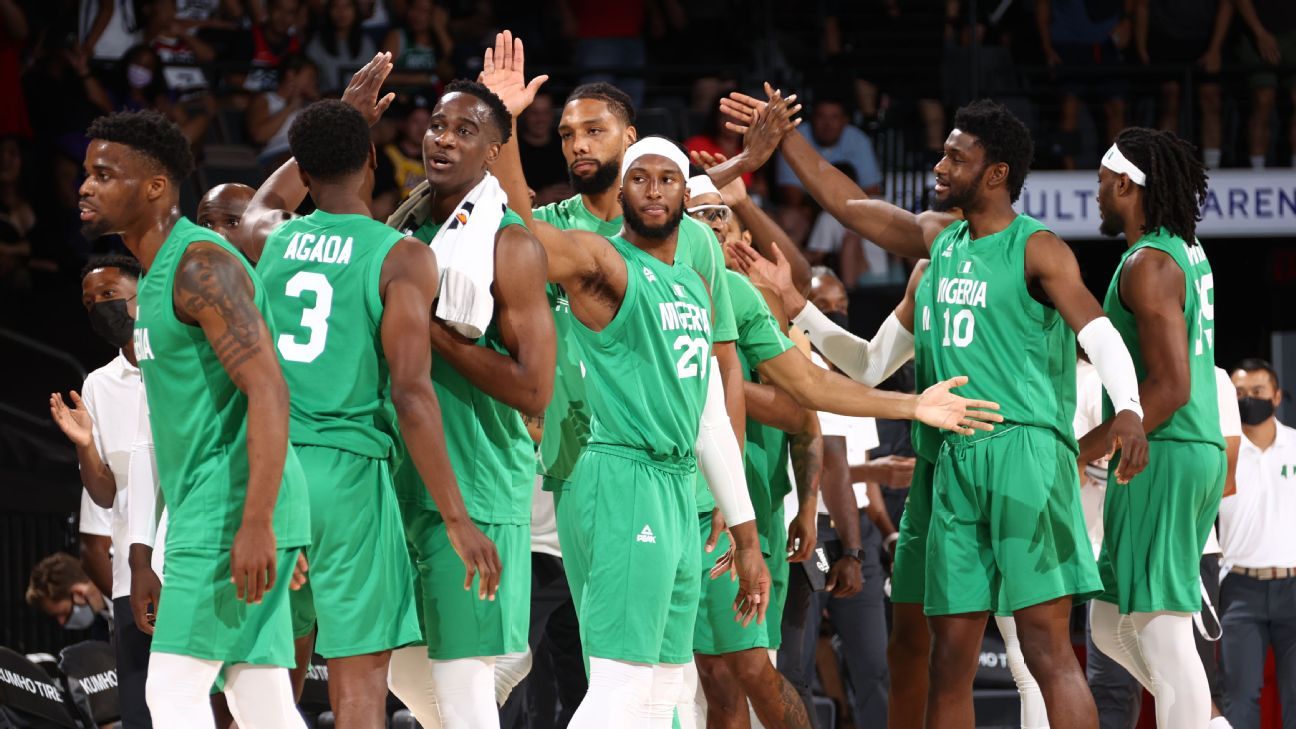 U.S. basketball team loses to Nigeria in exhibition stunner Sat, 10 Jul 2021 18:00:00 -0700-Team USA suffered a stunning and sobering defeat in its first exhibition game before the Olympics, getting outplayed by Nigeria in a 90-87 loss Saturday night.

LAS VEGAS — Team USA suffered a stunning and sobering defeat in its first exhibition game before the Olympics, getting outplayed by Nigeria in a 90-87 loss Saturday night.

Nigeria has seven current NBA players, and that talent showed, particularly in its physical defense and 3-point shooting. But the Americans started five All-NBA players and were just outexecuted by a team that appeared to play more together, a common challenge in international competition.

“In a way I'm kind of glad it happened,” Team USA coach Gregg Popovich said. “It means nothing if we don't learn from it. It could be the most important thing in this tournament for us. To learn lessons from this.”

Team USA came in with only four days of practice this week, and Friday was a light workout with no scrimmaging. Nigeria first gathered June 20 and had the entire team together since June 27. The difference showed.

When the pressure arrived — as Nigeria overcame a 10-point deficit and made it clear there was a possible upset in the offing — the Americans tightened up and started playing a very isolation-heavy offense. But with players such as Damian Lillard, Kevin Durant and Bradley Beal, Team USA has some of the best isolation players in the world.

But all three were rusty and bothered by the opposition's size and combined to shoot 9-of-30. Durant finished with 17 points but made just 2 of his first 11 shots. Beal played poorly, going 1-of-7, and Lillard didn't have his typical late-game magic as he missed several open looks.

“None of us have ever played with each other, we're just trying to figure it out,” said Jayson Tatum, who had 15 points and seven rebounds. “We don't have three to four weeks. This is good for us, we'll learn a lot from the film and we'll regroup.”

After falling down by eight points with less than two minutes remaining, Team USA made a furious rally and twice had the ball with a chance to tie, but its execution was poor. After Popovich called his last timeout with 13 seconds to play, the ensuing possession was messy and Team USA couldn't even get off a shot.

“I don't think anyone should act, nor will we act, like this is the end of the world,” Popovich said. “It's about everyone else deserves a lot of credit, and we have to play our ass off to do this.”

Nigeria made 20-of-42 3-pointers, repeatedly passing its way through Team USA rotations while racking up 21 assists. Guard Gabe Vincent, who plays for the Miami Heat and goes by Gabe Nnamdi when playing for Nigeria, made 6-of-8 3-pointers and finished with 21 points. Caleb Agada, who plays in the Israeli league and is soon to play summer league with the Denver Nuggets, scored 17 points off the bench.

“It was an exhibition and at the end of the day it doesn't mean much in the standings,” said Nigeria coach Mike Brown, a current Golden State Warriors assistant. “But it's a good win for us. I don't think any African team has been able to beat USA Basketball.” This is not how USA Basketball expected to open its Olympic summer.

Nigeria probably didn’t expect it either.

If there was any expectation of invincibility for the Americans heading into the Tokyo Olympics, it’s already gone — after Nigeria stunned the U.S. 90-87 on Saturday night.

Nigeria pulled off an international shocker with a roster primarily filled of little-known NBA players who found a way to beat a group of All-NBA, All-Star and max-contract performers.

“I thought that the Nigerian team played very physically, did a great job in that regard, and knocked down a lot of threes,“ U.S. coach Gregg Popovich said. “Give them credit.“

Kevin Durant, who had never before played in a loss for USA Basketball in 39 senior international games, scored 17 points. Jayson Tatum added 15, Damian Lillard had 14 and Bam Adebayo 11.

“Just goes to show that we have to play better,“ Tatum said.

The Americans had gone 39-0 in their last three Olympic seasons — including pre-Olympic exhibitions — on their way to gold medals and had been 54-2 in major exhibitions since NBA players began playing for USA Basketball in 1992. Plus, they had beaten Nigeria by a combined 127 points in their last two meetings — one at the 2012 London Games, the other a warmup for the 2016 Rio Games.

Nigeria lost to the U.S. at the 2012 Olympics by 83 points. Lost to the Americans again four years later in an exhibition, that time by 44 points.

Ike Iroegbu — a former Washington State player who spent some time in the G League — hit a three-pointer with about 1:15 left to put Nigeria up 88-80. Durant scored the next seven points for the United States — a three-pointer, two free throws following a turnover, then two more from the line with 16.5 seconds remaining.

Nnamdi made two foul shots with 13.2 seconds left to restore Nigeria’s three-point edge. The Americans ran 9.7 seconds off the clock on the ensuing possession without getting a shot off, and Zach LaVine missed a pair of free throws — the second intentionally — with 3.5 seconds left.

Precious Achiuwa got the rebound for Nigeria, and that was it. It’s only an exhibition — but the upset was still of the massive variety, the 22nd-ranked nation by FIBA beating the No. 1-ranked team and three-time reigning Olympic gold medalists.

Popovich heard the final buzzer and shook hands with Nigeria coach Mike Brown, the Golden State assistant, as the Americans walked off stunned.

There was an injury scare for the Americans late in the second quarter when LaVine got hurt on a play where he was closing out against Nnamdi. He went airborne after a head fake and came down awkwardly, grabbing at his left ankle before getting up and going directly to the U.S. locker room.

LaVine was fine and returned in the third quarter.

The bigger scare was the scoreboard. Nigeria trailed only 43-41 at the half, led for long stretches of the opening 20 minutes and simply wasn’t going away.

Nigeria: Achiuwa had perhaps the night’s top defensive play with 1:23 left in the first half, reaching with his left hand to block a Durant dunk attempt. Nigeria outrebounded the U.S. 46-34.

United States: Darius Garland and Saddiq Bey were Select Team players who got into the game. The Olympic team needed extra players because Khris Middleton, Jrue Holiday and Devin Booker are at the NBA Finals. The U.S. got 32 free-throw attempts to Nigeria’s 10.

Nigeria’s Chimezie Metu had a brilliant play in the third quarter — committing what would be goaltending in the NBA. Durant was taking a free throw, and as his shot bounced on the rim Metu reached up and knocked the shot away. That’s a legal play under FIBA rules.

A warning from Microsoft to its users 2021 What happened?

A shell targets a coalition base in eastern Syria