As a subscriber, you are shown 80% less display advertising when reading our articles.

Those ads you do see are predominantly from local businesses promoting local services.

These adverts enable local businesses to get in front of their target audience – the local community.

It is important that we continue to promote these adverts as our local businesses need as much support as possible during these challenging times.

Conor McGregor and Dustin Poirier both scaled the lightweight non-title limit of 156lbs ahead of their blockbuster third showdown at UFC 264 at the T-Mobile Arena on Saturday night.

Poirier was first to officially weigh-in on Friday in Las Vegas and seemed in more of a relaxed mood than an intensely-focused McGregor, who aimed a kick at his rival at the end of a heated press conference 24 hours earlier.

There has been a distinctly edgier build-up to the rubber bout than their January rematch, where the relations were cordial, even friendly, ahead of an encounter in Abu Dhabi where Poirier levelled the rivalry at one win apiece.

On Thursday, McGregor, who won their first fight in September 2014 when the duo were up and coming featherweights, insisted his setback at the start of the year was “a fluke” as he looks to get back to winning ways.

McGregor compared his foe to former heavyweight boxer Buster Douglas, who defied his status as a heavy underdog to defeat then world champion Mike Tyson in February 1990 in one of sport’s greatest upsets.

“He’s Buster Douglas, he’s going to be known for that,” McGregor said at the final press conference. “It was a fluke win and I’m going to correct it on Saturday night.

“This is my bread and butter, this is what wakes me up with fire in my belly – errors to correct, tactics to prepare for. I’ve had a great camp.

“I’m going to go through his head, put holes in them and take it off its shoulders. He’s done here, this is it for him, this is the end of the road. Saturday night he’s getting walked around that octagon and put to sleep.”

The Diamond is first one on the scales!#UFC264 | Saturday | BT Sport Box Office ▶️ https://t.co/45z0DbKW8e pic.twitter.com/vdehi3XWRk

Victory for either fighter would likely lead to a title shot against current 155lb champion Charles Oliveira before the year is out, a prospect which is relished by the controversial Irishman, a former two-weight titlist.

Despite three wins and as many defeats in his last six mixed martial arts contests, McGregor believes he is a superior fighter than the one who won lightweight gold by beating Eddie Alvarez in November 2016.

The 32-year-old, who has won 22 and lost five of his 27 MMA contests but is the underdog ahead of this weekend, added: “An evolution of that guy, I’m better than that man. I look forward to showing it on Saturday night.

“That night I won the second world title in Madison Square Garden was widely regarded as the single greatest performance in UFC history. This performance on Saturday night, I’m going to top it.”

Poirier admitted that McGregor “got into my head” before their first fight and the Dubliner seemed to attempt to get a rise out of the American by throwing his signature Louisiana style hot sauce into the crowd on Thursday.

On more than occasion, McGregor referenced Poirier’s wife Jolie, chanting “Jolie’s wife” and saying “your wife is your husband”. Poirier, who holds a record of 27 wins, six defeats and one no-contest in MMA, did not rise to the bait.

“The aura is not there any more,” Poirier said. “He’s a very dangerous fighter, no doubt, but I see a man here in front of me that I’ve defeated and I know I can defeat again.

“It’s just business, I see a man here. I don’t hate anybody, I’m in a different place mentally. Respect to him and everything he’s done.”

Former lightweight champion Rafael dos Anjos is on hand as a replacement in case anything befalls either of the pair ahead of this weekend’s headliner and the Brazilian-American also came in at 156lbs.

We want our comments to be a lively and valuable part of our community – a place where readers can debate and engage with the most important local issues. The ability to comment on our stories is a privilege, not a right, however, and that privilege may be withdrawn if it is abused or misused.

Please report any comments that break our rules.

Get involved with the news in your community

This website and associated newspapers adhere to the Independent Press Standards Organisation’s Editors’ Code of Practice. If you have a complaint about the editorial content which relates to inaccuracy or intrusion, then please contact the editor here. If you are dissatisfied with the response provided you can contact IPSO here 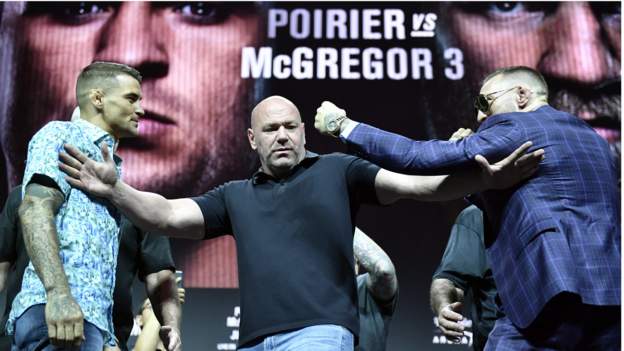 Conor McGregor said his trilogy fight with Dustin Poirier at UFC 264 will be “the end of the road” for the American.

After reverting to trash talking at the press conference for Saturday's lightweight bout in Las Vegas, the Irishman aimed a kick at Poirier, 32.

Poirier said McGregor's “aura's not there anymore” after beating the former two-weight world champion in January to avenge his 2014 loss.

The pair showed mutual respect before and after their rematch at UFC 257, but back was the bravado and name-calling from 'the Notorious'.

It took two members of UFC security to help president Dana White keep the fighters apart at the T-Mobile Arena, while McGregor also threw bottles of Poirier's Louisiana hot sauce off the stage.

After that win, he infamously said “I'd like to take this chance to apologise… to absolutely nobody”.

“I'm an evolution of that guy,” he added on Thursday. “I'm better than that man. I feel like I've come full circle and I look forward to showing it.

“That night was widely regarded as the single greatest performance in UFC history. This performance on Saturday night, I'm going to top it.”

Poirier has admitted McGregor “got into my head” in a heated build-up to their first fight in 2014 at featherweight, which McGregor won in under two minutes.

When they met again before UFC 257, McGregor seemed a changed man after rising to superstar status and returning to the octagon following his boxing match with Floyd Mayweather and a brief retirement.

Poirier also has his own brand of Louisiana hot sauce and McGregor said he was “delighted” to receive a bottle from Poirier at the weigh-in.

This time round, McGregor said he “didn't touch” that bottle yet called the sauce “garbage”. He said “your wife is your husband” and chanted “Jolie's wife, Jolie's wife”.

He also said Poirier was James 'Buster' Douglas, the 42-1 underdog who pulled off one of sport's greatest upsets by beating Mike Tyson in 1990.

“He's going to be known for that,” said McGregor. “It was a fluke win and I'm going to correct it on Saturday night.”

Poirier, the favourite for this fight, responded by saying “I don't hate anybody up here. I'm in a different place mentally. Respect to him and everything that he's done.”

And when one reporter pointed out to McGregor that he had won one fight since Barack Obama was US president (January 2017), he said “shut your mouth, I'll smash your nose in, you little rat”.

Asked why fans should expect anything different after being knocked out in the second round in January, McGregor ignored the question.

Although McGregor's win over Alvarez made him a UFC legend, he's stepped into the octagon just three times since, losing to Poirier and Khabib Nurmagomedov to take his MMA record to 22-5.

Poirier's win in January cemented his status as the number one ranked lightweight contender. He now has a 27-6 record after losing just one of his last nine, a unification bout with Nurmagomedov.

But with the unbeaten Russian now retired, Poirier turned down the opportunity to fight for the vacant lightweight belt in favour of a lucrative 'rubber match' with McGregor.

He could then have a chance to become a UFC world champion for the first time, while McGregor hopes to regain the title he was stripped off due to inactivity.

The winner of Saturday's fight is expected to face new lightweight champion Charles Oliveira before the end of 2021, after he beat Michael Chandler in May to succeed Nurmagomedov.

The Brazilian will be at the T-Mobile Arena on Saturday, which is the first UFC event in Vegas to accept fans since the pandemic and is a 20,800 sell-out.

Burns, 34, is ranked number two after winning eight of his last 10 fights. The Brazilian lost to welterweight champion Kamaru Usman in February, leaving him with a 19-4 record.

'Wonderboy' Thompson, a former kickboxing world champion, is 16-4 and the 38-year-old American hopes a victory over Burns will put him in contention for a title shot.

Listen to live radio commentary of UFC 264 on BBC Radio 5 Live and BBC Sounds from 03:00 BST on Sunday with John Gooden, Nick Peet and Jack Shore.

Djokovic Back in Wimbledon final to face Italy Berrettini