Gossip Girl 39; How the New Was Revealed

To Know Gossip Girl Is to Love Her Thu, 08 Jul 2021 10:00:00 -0700-Show creator Joshua Safran breaks down the reboot's surprising choice for how to handle the titular Gossip Girl. Spoilers ahead!

This post contains spoilers about the new Gossip Girl. XOXO!

When the original Gossip Girl closed up shop, one plot twist that always rankled fans was the decision to reveal Dan Humphrey as the titular blogger. Lonely Boy! Of all people! It didn’t make sense, of course, and it’s been a sticking point for viewers ever since the six-season show ended in 2012. So when Gossip Girl alum Joshua Safran—a writer and executive producer on the original series—got the chance to helm a reboot, he set about thinking of a way to right this eternal wrong. His solution? Establishing who Gossip Girl was in the very first episode.

In the reboot, which debuted Thursday on HBO Max, it’s quickly revealed that Gossip Girl isn’t one of the students, but rather a handful of the teachers at the Constance Billard school. The plan is hatched as the teachers sit in the lounge, grousing about work. One of them brings up the old Gossip Girl blog and they rush to a computer, reading the bygone posts and marveling at the voicey gossip held within. “These posts are like a lost Edith Wharton novel!” exclaims new teacher Kate (Tavi Gevinson). How nice it must have been, she starts to think, to have a way to exert power over absurdly affluent, entitled, and occasionally cruel students, who can get teachers fired with a quick call to mommy or daddy. After a short debate about the icky ethics of dusting off the Gossip Girl mantle and spreading gossip about the very students they’re tasked with protecting, Kate and three other teachers ultimately decide, over the course of the episode, to band together and relaunch the blog. (But on Instagram, of course.)

Safran plotted this concept out years ago, pitching it to original show creators Josh Schwartz and Stephanie Savage as a way in to the reboot. Safran, who grew up on the Upper East Side and went to a fancy, Gossip Girl–esque private school himself, was inspired by friends of his who taught in those same kinds of schools.

“I couldn’t let go of wondering what the world would look like from their eyes,” he said in a recent Zoom call. “I wouldn’t do the show if I couldn’t do that.”

It was also a way to amp up the appeal of gossip. In the post–Crazy Days and Nights, pre–Deux Moi world in which he was still working out the reboot concept, Safran was interested in taking a 360 approach to the blind item. “It’s no longer the fun of just a blind item,” he says. “Why are you telling the blind item? How do you get the blind item? Who’s telling you the blind item?”

Plus, it was also a good way to avoid the Dan Humphrey decision that plagued the original series, casting everything that came before the big reveal into question. Safran is sanguine about fan irritation over the choice, admitting in interviews that it wasn’t the right choice to make Dan Gossip Girl. “With Dan Humphrey being Gossip Girl, suddenly everybody has refrigerator logic and looks back like, Whoa, how did that happen? How did it work?” he says. “Of course it doesn’t fully sustain itself because we didn’t expect to even reveal who Gossip Girl was. It wasn’t even in our plans for many years. So of course it doesn’t line up because it wasn’t like we started on day one and said, ‘Dan is Gossip Girl.’

“This time around, I was like, Well, instead of refrigerator logic, let’s make the audience complicit in who Gossip Girl is,” he added.

In the pilot for the reboot, the teachers haggle for a bit over the logistics of how to revive the blog. They try using Twitter but quickly rule it out. “Twitter is a glorified chat room for meme sharing, conspiracy theorists, and Lin-Manuel Miranda,” one teacher muses in the Gossip Girl brainstorm. “If we really want to get attention, it’s Instagram only.” So, led by Kate, they launch an Instagram account and plot a way to pit the popular kids against one another, dividing and conquering one post at a time. “You ready to take the power back, do some good, and save the future?” Kate asks, not fully envisioning the thorniness that might ensue as she gets to know her students and learns the full scope of their homelives.

“That’s something we didn’t watch Dan go through,” Safran says of the ethical dilemma. The audience never got to see him struggle with the idea that he was throwing his friends, his family, and even himself under the bus by posting a Gossip Girl item. Safran didn’t want such an easy out this time around. “Isn’t that interesting to think about the times that Dan posted [items] on himself that would harm him because he thought it was the greater good? Let’s watch that this time.”

— An Exclusive Deep Dive Into Peter Jackson’s The Beatles: Get Back
— Joseph Fiennes on His Handmaid’s Tale Fate
— The 10 Best Movies of 2021 (So Far)
— Jane Levy on the Zoey’s Extraordinary Playlist Cancellation
— Is Luca Pixar’s First Gay Movie?
— How Physical Got Under Rose Byrne’s Skin
— What Is Bo Burnham’s Inside Really Trying to Say?
— Simu Liu Is Ready to Take On Marvel
— From the Archive: Jackie and Joan Collins, Queens of the Road
— Sign up for the “HWD Daily” newsletter for must-read industry and awards coverage—plus a special weekly edition of “Awards Insider.” 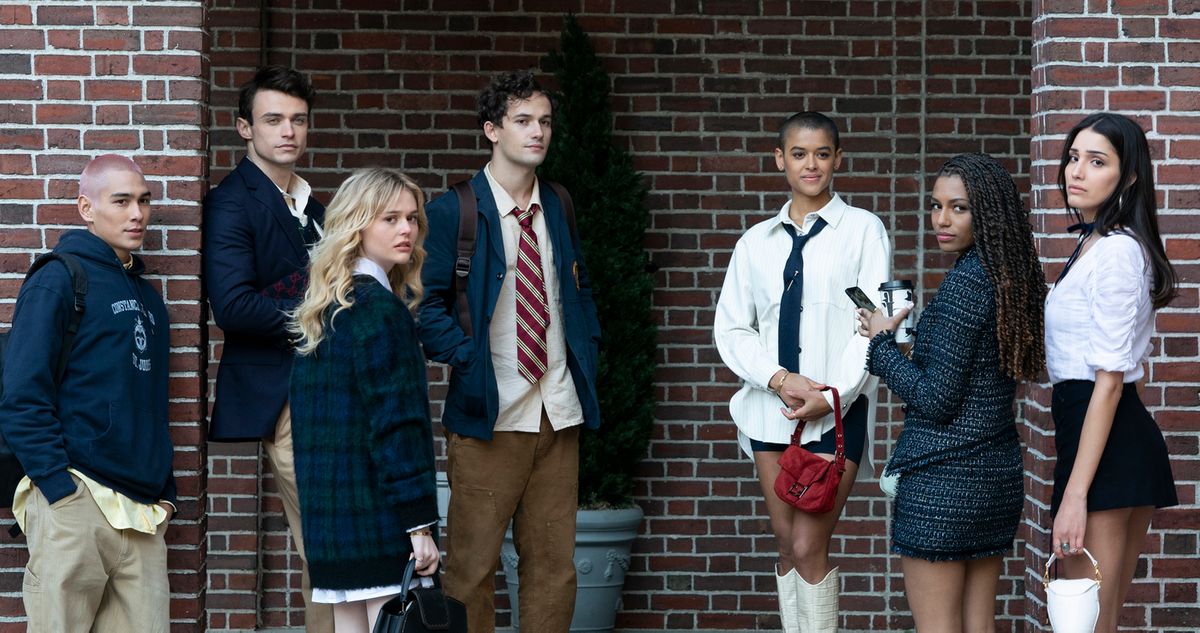 Between the years 2007 and 2012, the most discerning minds of a generation had but one question they desperately needed answered: Who the hell is Gossip Girl?! Not knowing the hidden identity of the anonymous blogger plagued not only our favorite Upper East Side teens, but also ourselves, keeping some of us (just me? Maybe?) awake late into the night making Pepe Silvia–style mental charts trying to figure out who was tormenting Manhattan’s elite.

Well, viewers of the latest installment of Gossip Girl — please don’t call it a reboot — won’t face any such torment, as the show tells you exactly who is behind the latest iteration of the muckraking blog within the first half hour of the pilot episode. It’s 2021, so in lieu of a website, Gossip Girl pops up via an Instagram run by (pause for those avoiding spoilers on a new show) the beleaguered teachers at Constance Billard and St. Jude’s, with none other than Tavi Gevinson’s character, Kate Keller, serving as DM master. I’ll hold while you sign up for your AARP membership knowing that former fashion-and-editorial wunderkind Gevinson is old enough to play a teacher on TV.

You see, Kate and her colleagues are tired of the wealthy inmates running the well-appointed prison after the French teacher gets sacked on the first day for not inflating grades, and they want to bring these nasty teen brats to heel. A fellow teacher just happens to have been a student at Constance during the reign of the original GG and brings up the blog’s archive as proof that there just might be a way to intimidate rich kids into good behavior. Logical fallacy aside — if anything, Gossip Girl pushed students into even worse behavior in an effort to destroy their peers — the move is brilliant and sets this continuation up for success.

The first series turned the identity of Gossip Girl into a mystery that dominated six seasons and much discussion around the show: Was it Jenny, the ambitious social climber from (God forbid!!) Williamsburg? Eric, Serena’s sweet and largely absent younger brother? Nate, the human equivalent of a golden retriever, who was revealed to have never sent a tip into Gossip Girl? I, personally, maintained it was Dorota, Blair’s borderline-abused housekeeper, who I thought deserved that moment of revenge.

When the show ended in 2012, though, it was revealed to be (pause for those avoiding spoilers on a decade-old show) … Dan Humphrey?! Actually, originally, it was intended to be Eric, but the writers scrapped that plan after it leaked to the New York Post, and then it was almost Nate before executive producer Joshua Safran left the show, which left the writers’ room to go absolutely nuts and make it Dan.

“I think there would have been holes in anybody being Gossip Girl, and it wasn’t Dan when I left the show [after season five], but I also understand why it is Dan,” Safran recently told the Daily Beast. “With Dan, it makes sense because he wanted to find a way in; but with Nate, it was because he’d never sent anything in to Gossip Girl, and if it had been Nate, it was based on this idea that he’d felt so guilty for sleeping with Serena that he had to create an alter ego to bring us all to it.”

Fans and critics alike were left deeply confused by the decision, which, if you go back and watch older episodes, mostly just makes Dan look like a complete sociopath. It’s pretty clear that wasn’t their plan going into the series, and while it does at least make some sense for Dan’s character — learn the one trick this ultimate outsider used to become the ultimate insider and get the girl! — it was a weird note for the beloved show to end on.

That legacy looms large over the new installment, which means it was inevitable that from the moment the opening credits rolled, viewers would be keeping an eagle eye open to spot the wizard behind the curtain. By making the identity of Gossip Girl secret to everyone except the viewers, it simultaneously clears the roadblock for fans hoping not to get tricked again and raises the stakes for the unfolding drama. To paraphrase Gevinson’s character, it doesn’t matter what the reality of the situation is, only what Gossip Girl says it is. That’s it! That’s the show!

Knowing that Gossip Girl isn’t just reporting on a so-called feud between half-sisters Zoya and Julien but creating it to maintain her own relevance and gain power makes their fights and plotting all the more agonizing. It’s a fascinating take on how people have weaponized the internet to further their own agendas and wield influence, especially when juxtaposed with Julien’s use of social media to control her own image. Who needs a secret blogger to uncover when you have a battle between the two sides of the online-influencer coin waging?

With this twist, the writers have teed up the potential for some truly fascinating drama involving the adults on this show — no disrespect to the drawn out will-they-or-won’t-they Rufus-and-Lily relationship, of course. Having the teachers be behind an anonymous cyberbullying Instagram account brings new meaning to abuse of power, and it’s not hard to see ways in which it could get delightfully messy as the storylines get more tangled up; I’m willing to go on record and predict a brewing romance between Kate Keller and one of the single dads of the show that’s sure to throw a wrench in her plan. There’s something incredibly delightful about a group of millennials being the ones to bring back Gossip Girl. It’s meta! We’re the ones who were addicted to it the first time around, and now it’s back, partially because of us. I’m Gossip Girl, etc., so forth.

Besides, this isn’t a true-crime show. No one is watching Gossip Girl to solve a mystery. Or, like, [checks notes] to have “a gateway for discussion of Michel Foucault and panopticism,” which, if I wanted that, I’d have stuck with grad school.

To Know Gossip Girl Is to Love Her