Atomic Kitten's Liz McClarnon says she can't look Gareth Southgate … Thu, 08 Jul 2021 00:00:00 +0100-Liz McClarnon, Jenny Frost and Natasha Hamilton were joined by a brass band as they gave a public performance of the track in London ahead of the match.

Pop and football fans alike have reacted with delight after discovering Gareth Southgate’s Three Lions have won the support of three cats of a different kind.

Atomic Kitten have reunited after 15 years to publicly back the manager and his team by releasing a revamped version of 2001 hit “Whole Again”.

And fans of both the band and the England team took to social media to express their delight and surprise. One person vehemently described it as “THE BEST DAY OF MY LIFE”.

Another fan Tweeted: “Southgate getting Atomic Kitten back together! Is there anything this man can’t do?!”

One said: “Absolutely obsessed with this, mainly because it brings me so much joy to think of all the middle aged footy blokes who will now be singing along to Atomic Kitten”.

Another added: “If you’re not listening to Atomic Kitten’s remix of their own song “Southgate you’re the one” are you even an England fan?”

The song has become a crowd anthem at football games, with fans changing the lyrics to: “Southgate you’re the one, you still turn me on, football’s coming home again.”

Frost later told Capital Breakfast she had returned from Ibiza, which is currently on the Government’s travel green list, to join the celebrations.

However the group, which scored a string of hit singles in the early 2000s, had not recorded an official version until now.

They said: “It’s been a whirlwind couple of days, but we are super excited and grateful to be able to contribute to the awesome energy and patriotism that is filling the England streets with this version of Whole Again.

The group first performed the new version of Whole Again to fans at Box Park Croydon in south London after Sunday’s match against Ukraine, in which England won 4-0.

They said they had subsequently received numerous requests to record a version for the tournament.

Atomic Kitten formed in 1998 and released hits including “The Tide Is High” and “Eternal Flame”, and have featured a shifting line-up including singers Kerry Katona and Heidi Range. 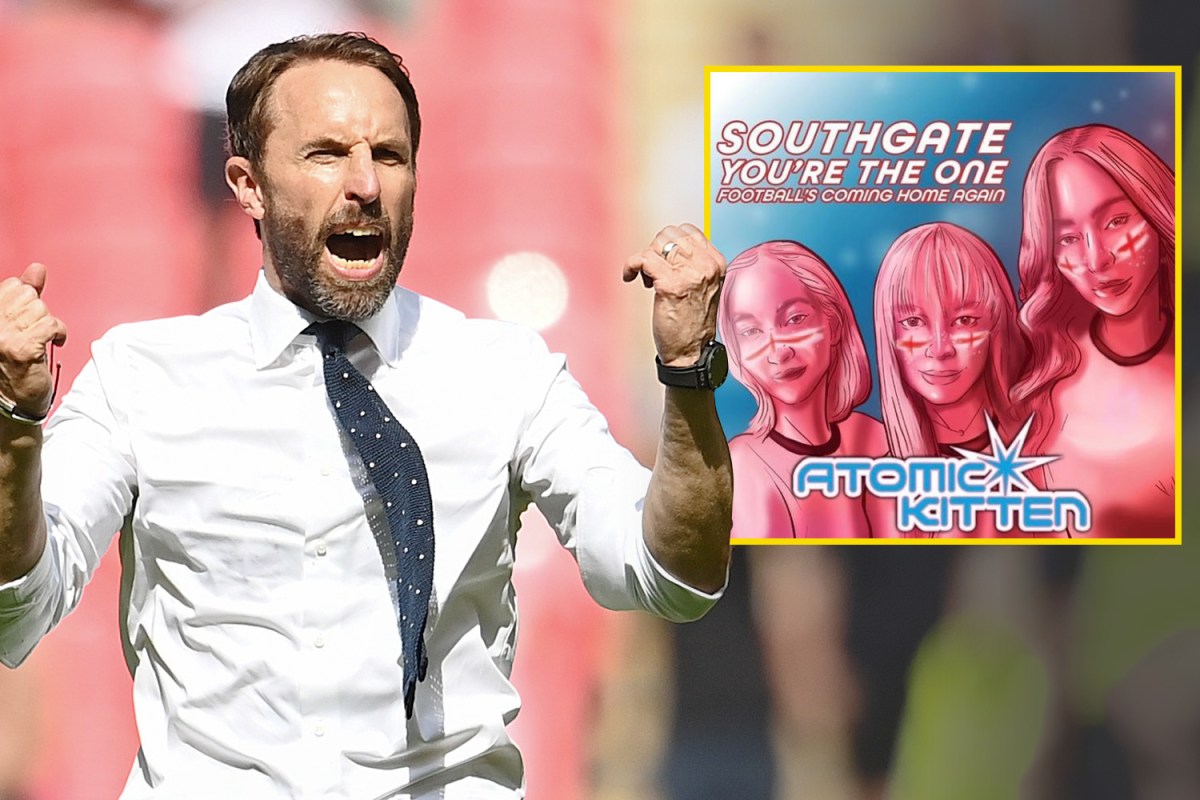 After years of waiting, the noughties pop sensations have given fans what they wanted, by reworking their number one single ‘Whole Again’ into an anthem in support of the Three Lions and their quest for Euro 2020 glory.

And they haven’t just changed the chorus, which has been sung in homes, pubs, streets, and stadiums up and down the country over the past month – they’ve rewritten the entire song to pay homage to our waistcoated coach of dreams.

However, Liverpool-born Liz admits she feels a bit awkward singing about the England boss ‘turning her on’ during the now-familiar and viral hit chorus.

Not that supporters seem to mind much…

“It’s been such a laugh,” McClarnon told Wednesday’s talkSPORT Breakfast.

“To be honest, I’m a bit uncomfortable singing ‘you still turn me on’”, she said, joking that she may not be able to look Southgate in the eye if she ever found herself serenading him.

“If we ever sang it to him in person? Well, I won’t be singing that bit, for sure!”

Of course, any self-respecting English football fan would know this is not Atomic Kitten’s first England hit – they also did the ‘official’ Three Lions song in the cult film Mike Bassett: England Manager.

It sounded as though she forgot, though, before a talkSPORT listener tweeted into the show to mention it…

“That was funny, we only did a day of filming and it was absolutely brilliant. We were made up.

“We had number ones at that point and everything, but we were made up that we were in a film – that was the best day ever!”

Liz then revealed the band only decided on the spot to re-record the hit tune last week, after a video of her and bandmate Natasha Hamilton singing the ‘Southgate remix’ for the very first time live at BoxPark in Croydon went viral on social media.

It went down such a treat that they decided to re-write the lyrics and go back into the studio, with the new-look song all wrapped up the next day.

McClarnon explained: “A friend of ours said we should do it in 2018 [when fans first changed the lyrics during the World Cup] and we thought, ‘yeah it’s amazing but I don’t know…’ but then this time around, because it’s been from the beginning, we thought maybe we should!

“When we got booked to sing pre-match before the last game [at BoxPark ahead of the quarter-final against Ukraine], Tash and I decided to sing the Southgate version, because we’d never sung it before and it was all football fans there, so of course we’ve got to sing it – and the video just went everywhere!

“We only decided to re-record it after the song went viral on the Saturday. We literally recorded it on the Monday morning and Monday night – Jenny [the third member of the band] was in a studio in Ibiza, that’s where she lives, and Tash and I went to a studio in Tranmere!

“Today is the craziest day I’ve had since the band split up, to be fair! We’re absolutely chocka. I’m so happy to be here on talkSPORT and then we’ve got loads of TV stuff and loads of recordings.

So, all we had to do was write, record and release a hit song to swag a Wembley ticket for the semi-final? Now you tell us!

What is the 2021 Copa America deadline and the carrier channels?