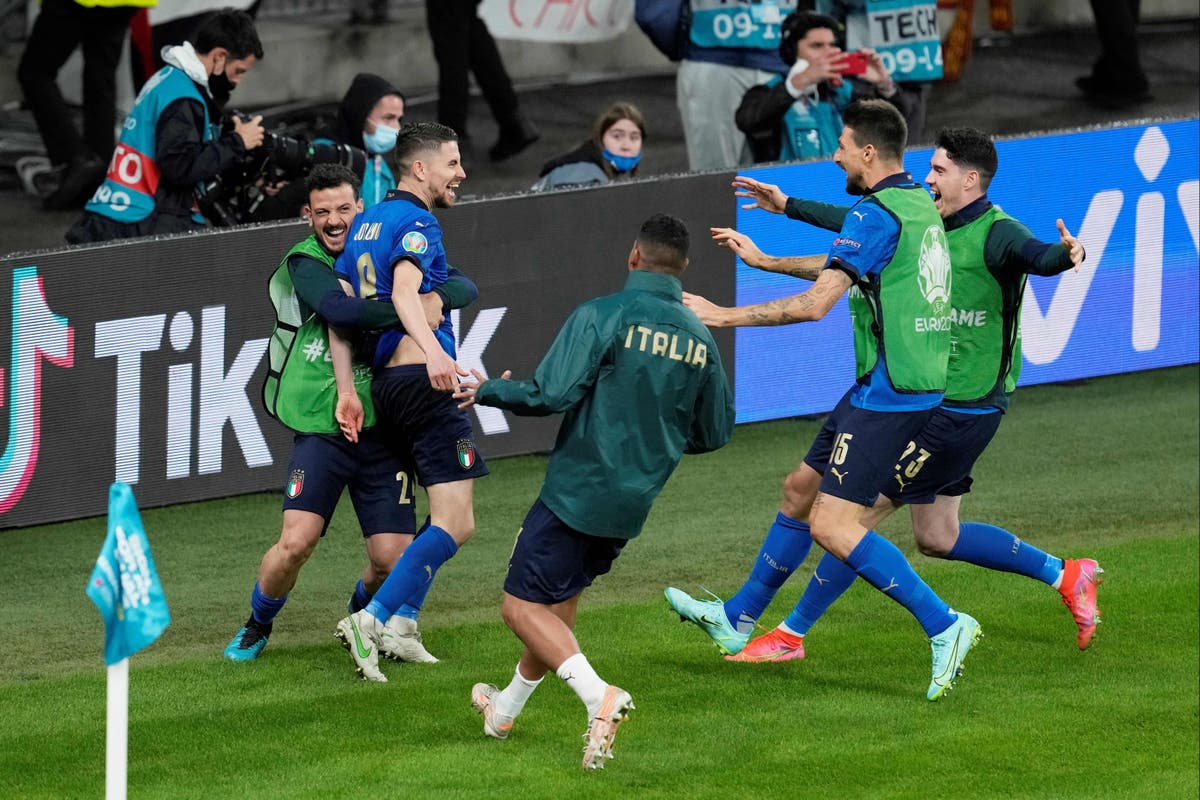 I can only think Simon has never seen Jorginho take a penalty before!

The Chelsea man did his usual delay and skip but the ‘keeper went down so early and he just had to stroke into the corner.

Jorginho, so good from the spot… AND HE’S DONE IT!

Italy are coming back to Wembley! They’re into the Euro 2020 final!

Oh, you just knew it! Morata is denied and Italy have match-point!

Penalty, that. Bernadeschi, the last man brought on for Italy, whips into the top corner.

Thiago up next and that’s the pick of the bunch, a little skip, sends Donarrumma the wrong way, and then steers it right into the corner for good measure.

Just. Moreno waits and doesn’t fool Donarrumma but he lifts it over the ‘keeper’s outstretched arm.

Bosh. Belotti shows them how it’s done, thumped low and hard into the sidenetting.

Shocker. Absolute shocker. Dani Olmo dawdles up and lashes over the bar. 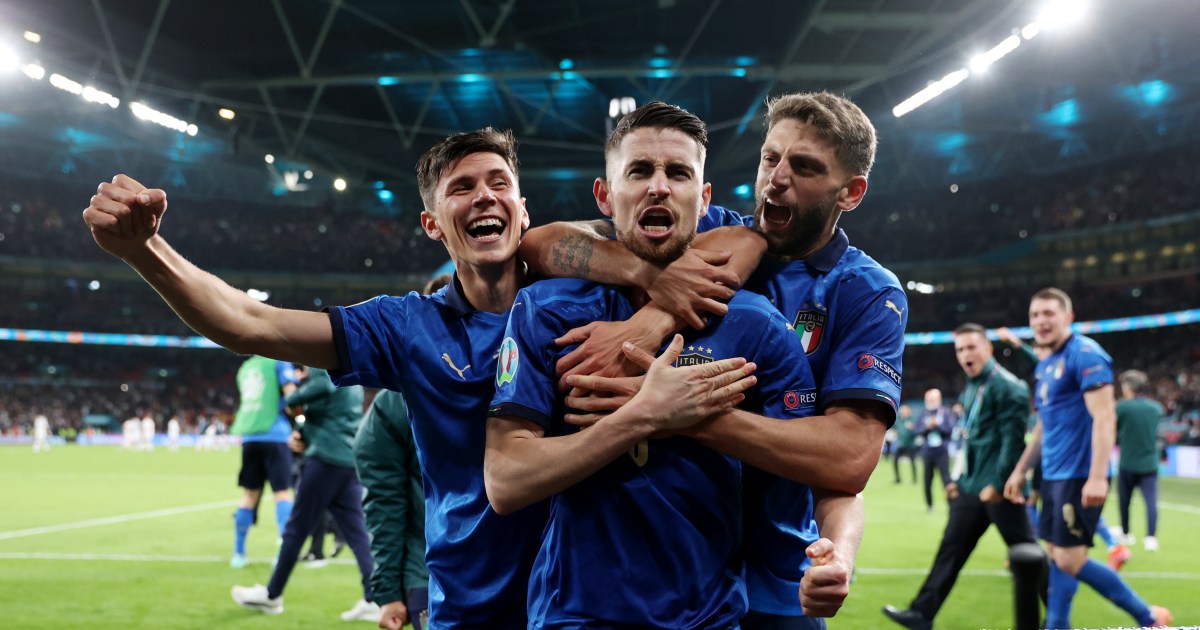 That is it. It’s time to wrap up the blog and head home.

Thank you for joining us on this great journey.. it really was an epic game of football.

Do give our match bulletin a read.. we have lots of stats thrown in for easy late-night reading.

See you tomorrow for the other semi-final.

(Not sure the Italian fans are heading home anytime soon 👇)

That’s six wins out of six in the tournament. They remain unbeaten for a 33rd game. What a run that is!

They will extend their London hotel bookings.. ready for England or Denmark for the final on Sunday.

Unfortunate end for Spain. They had 65 percent possession but that did not count for much in the end.

The first finalist of the Euro 2020 will be decided from the penalty spot.

A goal each for Italy and Spain in the 120 minutes. No more.

Italy, Spain, someone give us a goal.

It’s in the back of the net… but Berardi ruled offside.

Bad news for Italy. Their goal-scorer Chiesa forced off. Bernardeschi replaces him.

Into the final 15 minutes of open play to find a goal.

Spain break on the left.. Toloi breaks that down with his right hand and gets a yellow for his efforts.

Bit of a start-stop game now. Can see smoke coming out of the referee’s whistle with all those fouls.

That 80th-minute equaliser has taken Morata to the top of a list.

He’s now the highest goal-scorer for Spain at European Championships.

Another 30 minutes to find a winner… otherwise it will be penalties.

Spain ahead on possession, total shots and passes.

But Italy equal on goals scored. Onto 30 minutes of extra-time shortly…

Change of personnel, change of tactics… change of scoreline too?

Morata, the super sub! Scores the equaliser in the 80th minute.

Heading into the last 10

Pessina on for Verratti

Moreno on for Oyarzabal

Rodri on for Koke

As things stand, Italy are on course for a 33rd match unbeaten.

And a reminder that Italy have conceded just two goals in this tournament so far. Spain would need to double that tally at least to stand a chance.

Spain: Morata on for Torres

Italy: Berardi on for Immobile

Chiesa curls in the opener for Italy in the 60th minute from a counter-attack.

Spain’s goal-keeper Simon did not even try to stop that… he couldn’t. It was a fabulous goal from a fabulous move.

Busquets in the book

Seemed untidy but not THAT untidy. Spanish captain gets the first yellow card of the semi-final.

And he NEARLY scores a minute later! Curls it just wide of the post..

We’re back underway… 45 minutes of normal time remain for both sides to find a goal (or five).

Let’s see who gets there first.

With half the match (normal time) gone, Spain have enjoyed greater possession (65 percent) and have looked the more dangerous side but Italy have not sat back.

Unfortunately for both sides, it’s goalless.

On the touchline, who would you say be the happier of the two? And with the voice intact?

Or is that sarcasm?

Half an hour gone and Spain the only side to have a shot on target – add 253 passes and 69 percent possession to that.

Spain’s coach Enrique did say yesterday “we are leaders in ball possession [in the tournament]”.

First shot on target and Dani Olmo almost scores for Spain. Good block by Donnarumma after he gave the ball away from the goal-kick.

Italy attack from the left, Spain’s goal-keeper Simon left stranded on the edge of the box but Italy miss the chance to go one-up.

Back on the seats, everyone.

One-sixth of the semi-final gone

With 15 minutes being played, Spain, as they’ve done throughout the tournament, enjoying greater possession – 76 percent of it and 159 passes already.

No goals yet to show from the efforts though.

Five minutes into the semi-final, no shots on target but both teams have enjoyed equal time on the ball.

Spain did have a couple of scares but the offside flag – twice – helped them stay even.

We’re underway. It’s Italy vs Spain for a space in the final of the 2020 European Championship.

Spain get us started from left to right.

One team is playing its last match at Euro 2020…

That’s what our Twitter followers have predicted in the poll. Four minutes until kick-off

A bit of rain around in London. Could it influence play? Maybe, maybe not.

And here is what Italy’s coach Roberto Mancini said:

Here’s what Luis Enrique, Spain’s coach, said about his side on the eve of the semi-final:

“We are leaders in ball possession [in the tournament] but they can also make use of it and enjoy the ball, that’ll be the first battle we need to conquer.

“They can adapt to not having the ball, they’ve done that in the tournament in certain stages but they’re more comfortable with the ball and stronger with it.

Under an hour to go…

The crowd is rolling in and both teams have (finally) arrived at Wembley.

Kick-off is just 55 minutes away. 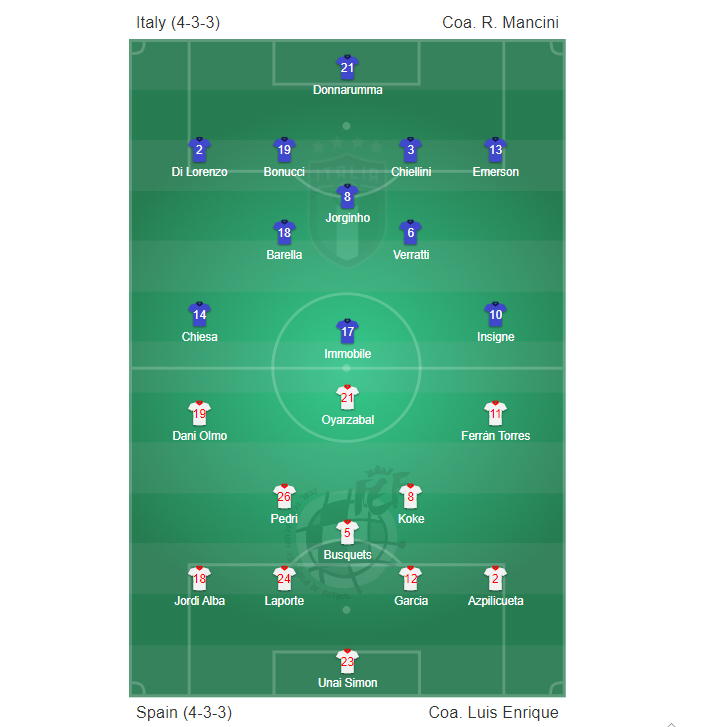 Incase you missed it: Morata drops to the bench for Spain 😲

Morata started every game at Euro 2020 despite criticism for his struggles in front of goal.

Here’s a look at how both teams have performed at this year’s tournament.

Italy haven’t dropped any points. Spain just don’t like giving the ball away…. but have won just ONE game in normal time at Euro 2020.

Neither side has seen red… And a semi-final isn’t the best place to get your first.

Both sides will create a record at kick-off.

In just under two hours, Italy vs Spain will become the most-played fixture at the European Championships.

You don’t need to be the late Paul the Octopus, that smart elephant or a super-computer to make the predictions.

It’s easy. Just head over to our Twitter page and take part in our first semi-final poll.

Road to the semis

Spain’s coach Luis Enrique has coped with personal tragedy and the effect of negative public opinion to rally his young squad and lead them to the semi-finals.

He incurred the wrath of many fans and large sections of the Spanish media for leaving Sergio Ramos out of his squad and picking no players from Real Madrid.

The coach turned more heads by only picking a 24-man squad instead of 26 and for encouraging French-born defender Aymeric Laporte to switch nationalities and lead the team’s defence instead of Ramos.

He then kept Sergio Busquets in the squad after the midfielder tested positive for COVID-19, showing a sense of patience he did not afford Ramos, who had missed much of the last season through injury.

Radio Marca described Luis Enrique as “pigheaded”, adding Spain were “not cut out to win this Euros and we all know it”.

Italy vs Spain marks a blockbuster first semi-final at Euro 2020 with Tuesday’s game the latest episode in a burgeoning rivalry between the nations meeting in a fourth consecutive European Championship.

Italy have won all five matches at this year’s tournament. Spain boast an average possession of 67 percent.

Read our preview of the first semi-final.

Donnarumma Who is Italy goalkeeper Gianluigi and who does he