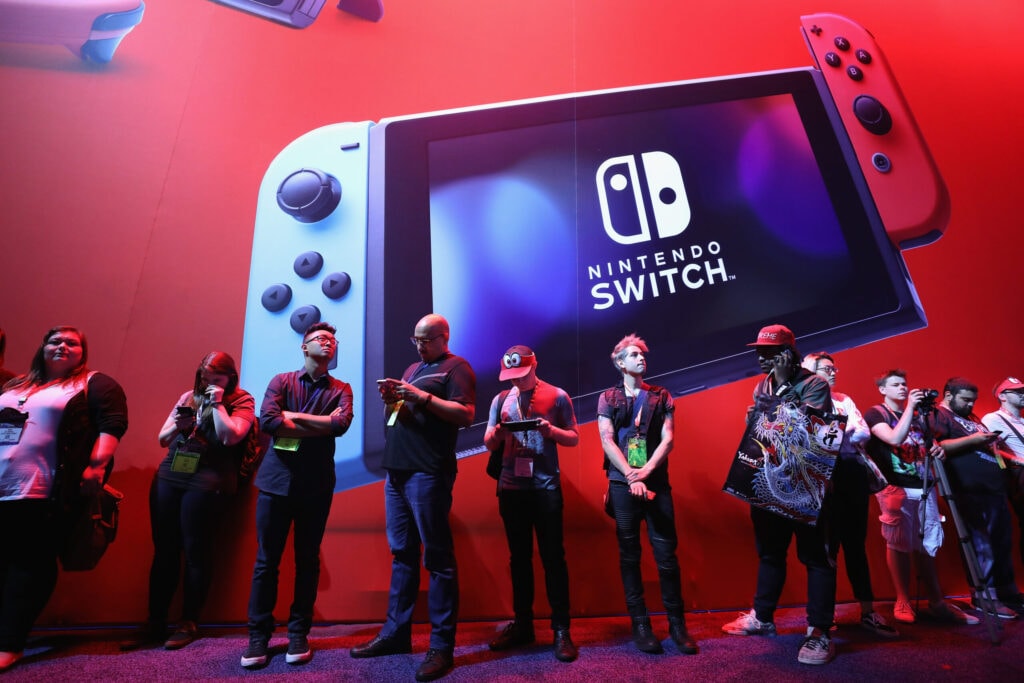 The rumors have been swirling for over a year now about the next iteration of the Nintendo Switch system. Fans were utterly convinced that last month’s Electronic Entertainment Expo (E3) would showcase the new and improved Switch Pro, but we were all left disappointed when it didn’t come. However, it was just a matter of time before Nintendo gave us what we all wanted and it’s finally here, the Nintendo Switch (OLED Model).

Let’s get through the facts first before we decide if this was worth the wait, starting with a release date and price point. The Switch OLED Model is due out October 8th and will cost $349.99, this is also the same day the newest Metroid Game, Metroid Dread releases so expected a bundle pack. It sports a vibrant 7-inch OLED screen and twice the internal storage space as the original Switch coming in at 64GB with up to 2TB in expandable storage.

Despite having a slightly bigger screen at 7.0 inches, that’s a .8 inch upgrade over the regular Switch and its LCD screen. It’s still the same size as the regular switch but does weigh half a pound more. The Joy-Cons remained unchanged, though it’s been given a wide adjusted stand. Despite what everyone was hoping for, what we were all convinced was coming…there is no 4k, the resolution remains the same though you can output to 1080p on your TV now, up from 720p.

The biggest addition is the LAN port which directly connects to the internet instead of relying on Wifi. This will be a big boon for any gamers playing competitively on their Switch, specifically in the Fighting Game Community for Nintendo Switch games such as Super Smash Brothers Ultimate.

So, with all that in mind the next big question for gamers to answer is whether or not it will be worth $349.99 to upgrade from their regular Switch or Switch Lite to the horrendously named Switch OLED Model. You’re getting .8 inches more screen room and though it has more internal storage than the previous switch, it’s still outpaced by most smartphones in terms of storage. The only clear upgrade it has over the Switch or Switch Lite you probably already own is that it can output 1080p on your TV over 720p and can directly connect to the internet.

Since the Switch is inherently designed and mostly used in handheld form, I don’t personally think $349.99 is worth the price of admission unless you’re just looking for the status that a new console brings. If you’re one of the few who somehow, don’t already own a Switch then waiting for the OLED Model and picking it up would be the smart choice, though maybe you could find a used Switch for half the price as others are looking to upgrade.

Regardless, Nintendo Fans are known to be some of the most loyal gamers on the planet and Nintendo will likely cash in big with this new upgrade. Some players don’t always see Nintendo as a direct competitor to PlayStation and Microsoft since Nintendo appeals to all demographics and age groups, looked at often as the family console. Nintendo has done themselves a big favor by waiting a year after the launch of the PlayStation 5 and the Xbox Series X and S, both of which are now in extremely short supply with very high demand.

If Nintendo can keep up with their own demand, they could own the holiday season as parents who are eager to buy new consoles may only have the Nintendo Switch (OLED Model) to pick up in time to put under the tree. Whatever the reception to the OLED Model is, one thing is almost certain, Nintendo is positioning itself to have another record-breaking year of profits.

As for myself, I primarily play my Switch docked so the upgraded resolution is something I’d get value out of but I’m still not convinced that I’ll be getting the OLED model. Even with the wired LAN port, I’d rather keep saving my money in hopes one of the mythological PlayStation 5s gets added to my online cart, there’s value in that. Though arguably, not much more at this point. 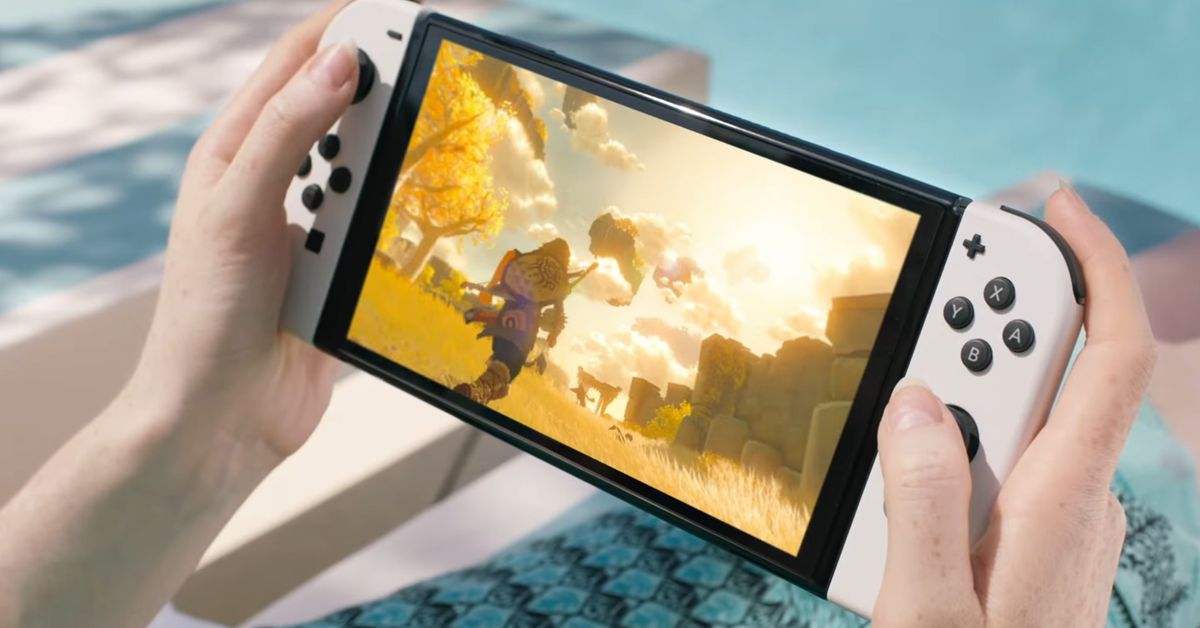 The Nintendo Switch is fine. Like Alex says, there’s no pressing reason for Nintendo to replace it right now. But does that mean today’s new OLED variant has utterly dashed our dreams of a more powerful Switch Pro, one that might play games like Xenoblade Chronicles 2, Hyrule Warriors, and Persona 5 Strikers without chugging?

I wouldn’t rule out a Switch Pro just yet, partly because I have a hard time believing Nintendo can resist pumping out as many models as the market will hold:

And partly because, if I were Nintendo, I’d be saving a Switch Pro for a moment it’ll truly count.

Today, Nintendo would have to battle chip shortages and the pandemic game development slowdown to replace a console that’s… already flying off the shelves? But fast forward to 2022, and the company might have a more pressing reason to make a Switch with more horsepower.

If we assume the rumors are true, Nintendo has been toying with a more powerful Switch for several years now, but repeatedly decided to hold back. In March 2019, longtime game industry reporter Takashi Mochizuki wrote that a new Switch would have “enhanced features targeted at avid videogamers,” only for Nintendo to announce a model that simply added additional battery life. This March, Mochizuki got far more specific about a new OLED Switch due this year. One with “an upgraded Nvidia Corp chip with better graphics and processing” and 4K graphics when streamed on the TV thanks to Nvidia DLSS. But as we now know, the OLED model doesn’t have a new CPU, period. It’s got the same guts.

You can argue that’s because the Switch doesn’t really need a new chip — and we do argue it, right here — but Nintendo might have had an uphill battle to get new CPUs to begin with.

Remember, we’re in the middle of a historic chip shortage, a shortage with seemingly no end in sight, where giant companies are buying up all the chip-building capacity they can from an incredibly small number of players that actually produce the silicon. TSMC, which reportedly produces 92 percent of the world’s cutting-edge chips (and as much as 60 percent of the rest) is said to be prioritizing Apple and hard-hit automakers over other firms.

The chip shortage will likely get worse before it gets better

Even if Nvidia designed a new Tegra processor, built some sample parts, and Nintendo designed a new Switch Pro around it, that doesn’t mean Nintendo’s suppliers could necessarily produce the chips — particularly not at the quantities you’d need to meet demand and fill store shelves. There could be dire Switch Pro shortages, not unlike the shortages we’ve been seeing for the PS5, Xbox Series X, and every single decent Nvidia and AMD graphics card now.

But Nintendo doesn’t need to fight for additional capacity if it sticks with today’s Nvidia Tegra chips. It just needs TSMC to keep the existing chips coming, where it’s already got quite a bit of capacity: the production lines now provide enough chips for over 28 million consoles a year.

Besides, while Nintendo has successfully surfed shortage waves in the past to drum up tremendous sales (most famously with the Nintendo Wii but also the early Switch), a Switch Pro shortage might hurt more than it helps.

The existing Nintendo Switch has been the best-selling console in the US for 30 months in a row, and global sales were up 44 percent in the first three months of the year. Nintendo probably doesn’t want to risk that momentum with a mixed message about how you can’t easily buy a Switch, or how the new more powerful Switch may or may not play the same games as the old one (a mistake it made with the Wii U, and arguably with the New Nintendo 3DS). It’s also not clear if Nintendo has any games ready to show off and justify the power of a Switch Pro anyhow — the Breath of the Wild sequel is now due in 2022, we’ve heard little about Metroid Prime 4 since Nintendo rebooted development back in 2019, and Bayonetta 3 still doesn’t have a release date. While it’s possible Nintendo has surprises up its sleeves, the pandemic hasn’t made game development easier.

When Nintendo introduced its first Switch revisions in 2019, and again today, experts explained that mid-cycle refreshes are designed primarily to keep the momentum going. Nintendo’s done this with portables for years, NPD analyst Mat Piscatella explains:

And while the OLED Switch doesn’t need a new Nvidia chip to keep that momentum today, there’s nothing stopping Nintendo from dropping a new processor into that OLED Switch (perhaps even literally) in the future, if Nintendo feels the need.

One of the striking things about the full-size Nintendo Switch’s refresh in 2019 was just how little the internal design changed. We dove through teardown photos back then, and the new motherboard and processor almost looked like a drop-in replacement: same size, same layout, same battery.

Perhaps next year — when Nintendo’s once again feeling the pressure to keep Switch sales high, no longer needs to fight for chips, and has a system-selling video game like the Breath of the Wild sequel primed and ready to go — it’ll try again. Nintendo can drop that new-and-improved Nvidia Tegra chip into this year’s OLED-equipped Switch, give it a snappy name like New Nintendo Switch i Max Plus Remake Intergrade, maybe add some Bluetooth headphone support, and call it a day.