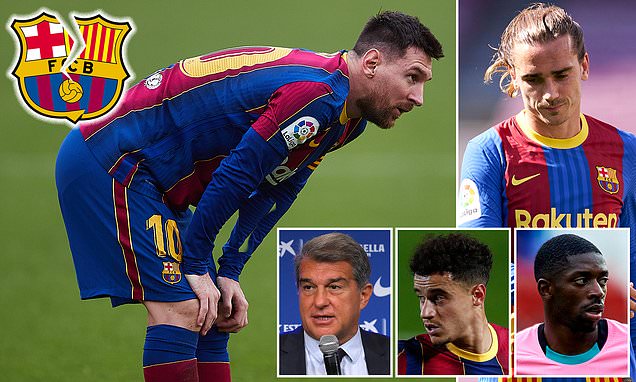 By Pete Jenson for MailOnline

It could end with Philippe Coutinho and Ousmane Dembele not being registered to start the new season.

No matter how Barca rearrange the deckchairs, the ship is still sinking. Sportsmail tries to unravel the mess.

The wage bill. LaLiga has its own Financial Fair Play rules limiting what each club spends on salaries.

They have been trying to sell players for the best part of the last three years. It was the summer of 2019 when Coutinho went to Bayern in the hope that they would make the loan permanent. It didn’t happen.

They have tried to move Samuel Umtiti for almost as long. They can’t shift their stars. They had to resort to some financial gymnastics to get Arthur Melo out by bringing Miralem Pjanic in, but now they are stuck with Pjanic.

He wants to stay and Barcelona want to keep him but even renewing him on a deal that pales into insignificance compared to his last contract in 2017 is not conducive to making this £156m reduction.

That he never comes back. That his last games for Barcelona were those tepid end of season league defeats that saw them blow the title in an empty Nou Camp stadium.

They can write-off players’ contracts. They have already done it with bizarre Brazilian midfield signing Matheus Fernandes, who now says he wants to take them to court for unfair dismissal – that’s the least of their problems by the way.

They can sell some of the younger fringe players too. Konrad De La Fuente has been sold to Marseille, while Jean Claire-Todibo has gone to Nice. But this is chipping away at the iceberg with hammer. A very small hammer.

Pedri has lit up the Euros. Ansu Fati is injured but would clearly have a long line of suitors if he was offered. And powerful midfielder Illaix Moriba, who emerged last season, has already sparked interest in England.

But this is every bit as much ‘selling the crown jewels’ as not renewing Messi. These three players are the future of the club.

(Left to right) Pedri, Ansu Fati and Illaix Moriba are seen as the future of Barcelona

The problem with this is that it costs money to pay people off and that adds to Barcelona’s debt.

Debt, along with income is the marker used to calculate LaLiga’s wage caps. On the bright side it would contribute to next season’s wage cap. It kicks the problem down the road and that looks a good option right now.

Griezmann no. He has already been messaged by Koeman with regards to when to arrive for pre-season training. The club still want a Messi, Aguero, Griezmann forward line for next season.

But Coutinho and Dembele are in danger of becoming collateral damage. Coutinho is still recovering from injury and Dembele has just picked up an injury that will keep him out for four months. Barcelona could make it clear that they will not be registered.

The club are not holding their breath. Messi’s view seems to be that he did not get Barcelona into this mess. He has done nothing but bring revenue and trophies for the last 15 years.

The blame lies at the feet of previous president Josep Bartomeu who handled the club’s finances so poorly. Messi also has to bear in mind his own legal position.

Barcelona can come up with an elaborate scheme to pay him the same amount of money but over a longer period of time incorporating future ambassadorial work but Messi has already been in trouble with Spain’s tax man and another offence would run the risk of a custodial sentence.

Bartomeu’s doing once again. Deals that were set up by the previous president. Aguero was Laporta’s doing but that was to persuade Messi that his future lay at the club.

There is one option that they may have to consider: break the rules and pay the consequences.

LaLiga’s resolve has still not really been tested in terms of what they will do to clubs who break the wage structures imposed on them. Barca could go their own way and then face the fines further down the line.

LaLiga don’t want to lose Messi, their biggest selling point. And the Spanish taxman does not want to lose his biggest contributor. Everyone believes a way will be found, for now but nobody at the moment knows what it is.

The comments below have not been moderated.

The views expressed in the contents above are those of our users and do not necessarily reflect the views of MailOnline.

By posting your comment you agree to our house rules.

Your comment will be posted to MailOnline as usual.

Your comment will be posted to MailOnline as usual

Part of the Daily Mail, The Mail on Sunday & Metro Media Group

BARCELONA CRISIS Q&A: What exactly is going on at the debt … Tue, 06 Jul 2021 12:00:00 +0100-Barcelona have reportedly far exceeded their staff cost limit, which is controlled by La Liga, and are under increasing pressure to reduce their wage bill as a …

Barcelona have reportedly far exceeded their staff cost limit, which is controlled by La Liga, and are under increasing pressure to reduce their wage bill as a matter of urgency

Barcelona's financial woes are reportedly so serious they cannot register the likes of Lionel Messi or new arrivals Sergio Aguero and Memphis Depay ahead of the new season.

According to Goal,Barcelona have far exceeded their staff cost limit, which is controlled by La Liga, and are under pressure to reduce their wage bill as a matter of urgency.

Eric Garcia and Emerson were also recently snapped up by the Catalan giants and similarly cannot be registered.

Barcelona president Joan Laporta has had to get creative in this summer's transfer window, which is why the four players were all signed for free.

Will Lionel Messi be at Barcelona next season? Comment below

Laporta has been desperately trying to balance the books by offloading the highest earners or those out of favour at the club, but he isn't currently having as much success as he would like.

Francisco Trincao has joined Wolves on loan for the season, and the Midlands club have the option to buy.

Junior Firpo is set to join Leeds in a deal worth around £13million, which will save Barcelona in the region of £8m per season.

Konrad De La Fuente and Jean Claire-Todibo have also both been sold, with the duo heading to Marseille and Nice respectively.

The two transfers save Barcelona around £9m in wages and deal payments.

Matheus Fernandes saw his contract terminated at the end of June, but he has plans to sue Barcelona for unfair dismissal.

These departures are not enough to keep Barcelona afloat, though, and Samuel Umtiti, Philippe Coutinho and Miralem Pjanic are all on the transfer list.

The La Liga giants are hoping that by selling the trio they can shed a further €200m (£171m) from the wage bill.

Perhaps the biggest worry in all this from a Barcelona perspective is the club may not be in a position to re-sign Messi.

Barcelona want to get Philippe Coutinho off of their wage bill

Currently, the six-time Ballon d'Or winner is a free agent and the onus is on Barcelona to offer him a new bumper deal once they have cleared salary space to re-register him.

Messi is believed to be in contract talks with the club he has represented his entire professional career but other sides, including Paris Saint-Germain and Manchester City, may look to test the water with a contract proposal.

... read more
– July 6, 2021
Barcelona BARCELONA CRISIS Qamp;A What exactly is going on at the debt

Jessica Springsteen set to make Olympic debut with US equestrian

A private message from Mascherano to Aguero

Laporta meets with Koeman to decide his future