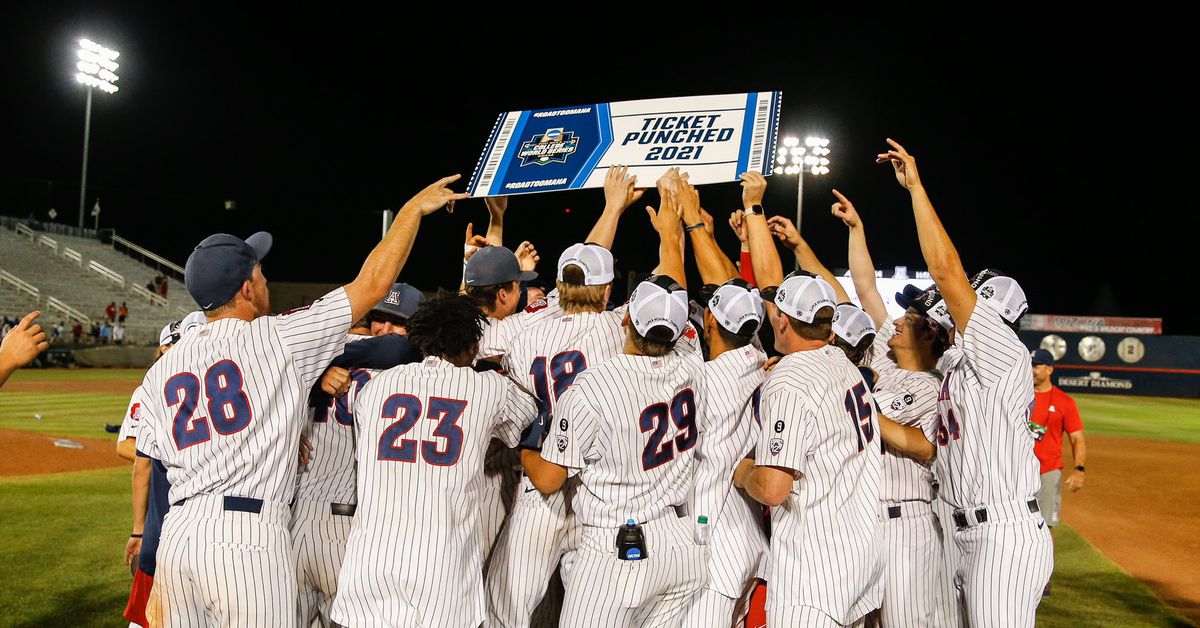 Arizona baseball blasted Ole Miss 16-3 on Sunday to win the Tucson Super Regional and clinch their ticket to the College World Series for the first time since 2016.

Our recap can be found here and below are some of the notable postgame quotes along with the full interviews.

Head coach Jay Johnson on reaching the College World Series for a second time: “In terms of my emotions, this is the tied-for-first happiest day of my life. Hands down. I’m so proud of this team. I’m so proud to this program, I’m so proud of the players, the coaches, administration, and there’s so many people that contributed to this. Relative to the accomplishment, I mean, you can’t get further past one hand than the number of programs that have been twice in their last five opportunities. I mean, it’s six years, but it’s five years, really, because we didn’t have a World Series last year. And two completely different teams, two completely different stories. But one thing—incredible character, incredible fundamentals and incredible competitiveness out of both groups. This is as good as it gets.”

TJ Nichols, who pitched 5.1 innings of one-run ball, on the postgame celebration: “It was insane. Man, I couldn’t stop smiling. It was good to just go one by one each guy. Just a lot of memories. We got 6 a.m. weights, to the four-hour practices. I mean, we just celebrated and it was nice hugging everybody and seeing everybody’s face.”

Arizona first baseman Branden Boissiere, who had four hits and five RBI, on the postgame celebration: “It was awesome. In January, we stood out on the mound and [Johnson] told us that we’re gonna end up playing postseason baseball here and celebrating and dogpiling at the end of the season, and we did it. So it’s awesome to be in front of these fans, and especially my family, just to see the joy on their faces.”

Boissiere on having this opportunity after the 2020 season was cancelled: “Last year when the season got canceled, we were all kind of heartbroken. We didn’t know what to do because we did have a really good team, we started off this season pretty hot. So when we were able to come back during after quarantine, we really got after it and got to work on getting better on things that we needed to improve on, and I think it really showed this season.”

Johnson on how it feels to clinch a College World Series berth at home versus on the road at Mississippi State in 2016: “This is way better. Not to take anything away from that. That was amazing. It was like Rocky IV for the movie and we were Rocky going into beat Ivan Drago with that pitching staff and that hostile environment of 14,000 people. This was more of, I don’t know how to say it, but everything that you dream about. The significance of that out there right now and seeing our players as happy as they are, as proud as they are, get a chance to be with them at that time with them and their families is why I do this. And so I couldn’t be happier.”

Johnson on how long this kind of complete team has been in the making: “You might have the date that I was hired, but that day. The day I got the job, Preston Price committed Arizona. He was the first one and he was on the mound tonight. Donta Williams, Tony Bullard, they visited on the same day. It was really hot in June or early July of 2015. It spanned all the way to this summer. Tanner O’Tremba, what a story, getting him as a transfer. Austin Smith, getting him as a transfer. That all occurred this summer. And that’s not the start and the end of it. I look at somebody like Kobe Kato. I love that kid like he’s my son, because I didn’t keep him on the roster the first year. I just basically allowed him to be in the program, and then the next year he made the team but didn’t travel all the time. And then last year, he was kind of on his way a little bit. I think if 2020 would have continued, this wouldn’t be a surprised. He would have taken on a bigger role, and now he’s one of the best second basemen in the country. And you think about the guys in recruiting that were going to other schools at one point that ended up coming here for a variety of circumstances. It’s every day of your life from whatever the day that I got here to tonight, so personally it holds a lot of significance.”

Johnson on starting freshman Dawson Netz on the mound: “I woke up pretty early this morning, like 5:30, no alarm. I came up here and I wrote out their lineup that I thought that they would go with against a right-handed pitcher because that’s what we had available. … And then we wanted to script the game and it turned out a lot different than it was supposed to. We had Dawson pegged for five hitters. Or if he went six up, six down, he was gonna throw the first two innings. That’s about the point where he’s been at his best throughout the year. And if you look at his outings, if we’ve tried to go past that, it hasn’t always gone good. So I got greedy and that was the one mistake that I made was. He’d gone six up six down, we tried to let him go get (Hayden) Dunhurst to start the third and then base hit. Then we were going to go to TJ for one time through the order. And then us scoring all those runs completely changed it. I thought he has such great stuff, they started to press a little bit to try to catch up, they opened up the zone, so he remained a good matchup. But it was going to be TJ to Riley Cooper for five hitters, we felt like that’s what he had available, then we were going to go to Chandler (Murphy) kind of in the same way as TJ—one time through the order. And then it was going to be Preston, Ian Churchill for a couple hitters, and then finish with Vince (Vannelle). But we got the lead and TJ got rolling and I liked the way that worked out a lot better than how it scripted in my head.

Nichols on the pitching plan: “He just told us today at a 12 o’clock meeting that we have a plan laid out. And I was supposed to go after Dawson. And I was supposed to go one time through the lineup. And I guess he kept me in there. I’m just grateful he kept me in there. I was given an opportunity to succeed and I did my best. So yeah, it was great.”

Johnson on Arizona’s offense tying its season-high in hits (20): “It was just just an assault of quality at-bats. I thought our was put to bed appropriately for this season, given the quality of these players and these hitters in this offense. What a performance. I think Friday night’s game and Sunday’s game are the best we’ve played all year. And we’ve played some really good baseball this year, so that says a lot. … I think this is the best offense in Pac-12 history. And I’m not a historian, so I can’t validate that, but if there’s one that’s equal, I’d like to see what that looks like.”

Johnson on Arizona’s offense having to face Vanderbilt and two elite pitchers—Jack Leiter and Kumar Rocker in the CWS: “I told the players on Selection Sunday, there’s no other way I’d have it. I mean, this is meant to be for this team. And we’re really, really excited. We know what they are and how quality they are, and all those types of things, so what a better way to start the College World Series than that?”

Johnson on joining former UA coaches Jerry Kindall and Andy Lopez with multiple CWS appearances: “I can’t even begin to express it because of the respect that I have for both of those men. And completely different styles of coaches, but the best. They’re the standard. They’re why I take this job, Jerry Stitt, throw him in there as well. Jim Wing, throw him in there as well. Sometimes I’ll pinch myself that I’m the head coach at the University of Arizona. And honestly, all I want to do is make everybody that cares about this program, this university, from this town, proud. And it doesn’t mean going to Omaha, but to have a second crack at being in Omaha is very meaningful to me. The root of that is I just hold this program and this place in such high regard.”