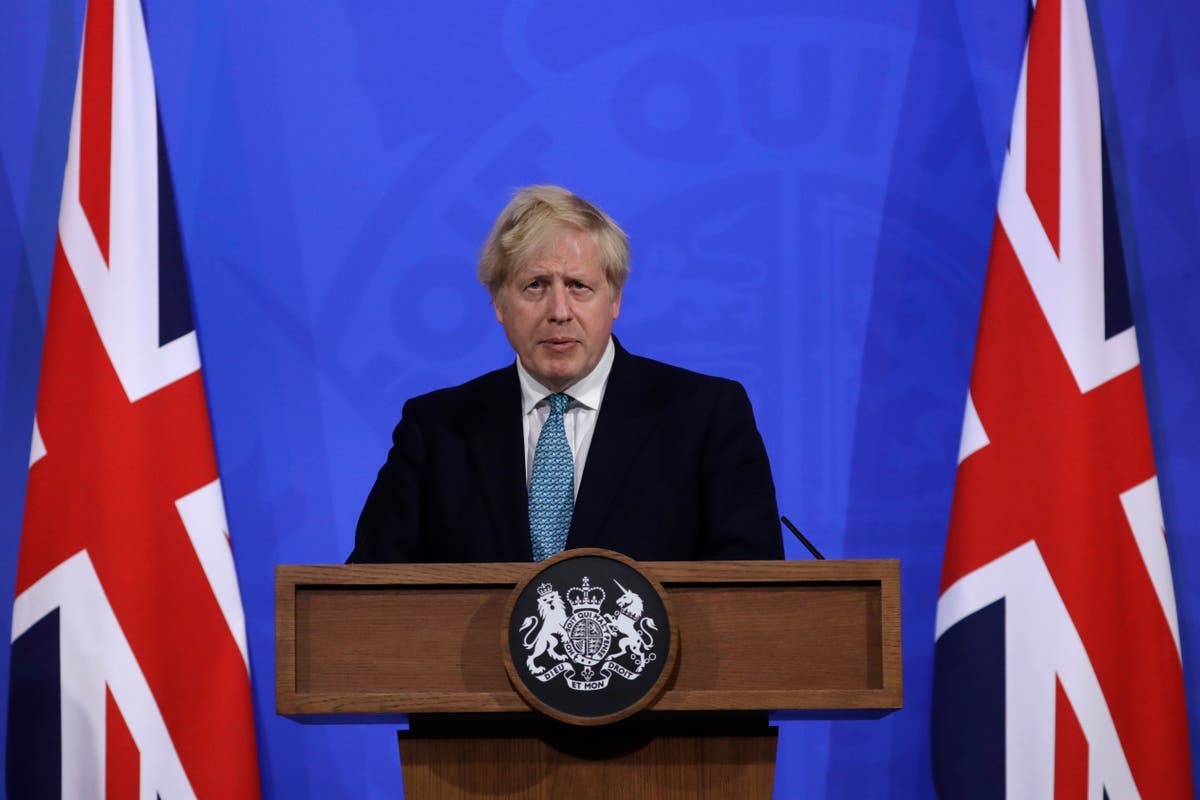 What time Boris Johnson's lockdown announcement is today, and … Mon, 14 Jun 2021 10:00:00 +0100-The prime minister is expected to announce a four-week delay to the final stage of his roadmap out of lockdown.

Boris Johnson will announce to the public today ministers’ final decision on whether or not to delay the fourth and final stage of his roadmap out of lockdown, provisionally set for June 21.

At a press conference this evening, the prime minister is expected to confirm that some coronavirus restrictions will remain in place in England beyond this date.

He is reportedly planning to tell the nation that “one last heave” is necessary to get the nation over the line, set to last four weeks.

This means that most current Covid-19 rules are likely to remain in place, including the rule of six indoors and private gatherings outdoors with more than 30 people being banned – although exceptions are possible.

Social distancing guidelines and mandatory mask-wearing on public transport and in shops and indoor venues could also continue.

Mr Johnson’s press conference is set to take place at 6pm this evening – later than the 5pm start time of most government briefings held throughout the pandemic.

The announcement comes amid concerns over the spread of the Delta variant, first identified in India, which Public Health England (PHE) recently announced accounts for more than 90 per cent of British Covid-19 cases.

The variant is around 60 per cent more transmissible than the Alpha variant, first identified in Kent, and is better able to evade vaccine immunity, with one dose giving just 33 per cent protection against infection. This rises to 80 per cent after a second dose.

PHE also announced that England’s R rate has increased and is now between 1.2 and 1.4, meaning that the number of new infections is growing by between three and six per cent each day – or more, as these estimates represent transmission two to three weeks ago because of the time delay between infection and symptoms being developed.

Although the delay, if announced, will be welcomed by the scientists who have warned the government that cases and hospitalisations could surge if all restrictions are lifted, it represents another heavy blow for the arts and hospitality industry.

Clubs are likely to remain shut and pubs, bars and restaurants as well as theatres, cinemas and other venues won’t be allowed to welcome mixed-households groups of more than six.

Ministers have debated an exception for weddings, according to The Telegraph, which could be allowed to go ahead with more than 30 guests from 21 June. Boris Johnson is set to hold an announcement on the final stage of lockdown easing this afternoon.

He is expected to delay the last step of the roadmap by four weeks, meaning the 21 June unlocking will no longer go ahead.

The delay has been caused by the spread of the Delta variant of Covid-19 first identified in India.

Experts believe the variant to be 60 per cent more transmissible than the previously dominant Alpha variant that originated in Kent. It is also now responsible for 90 per cent of cases.

The press conference is expected to take place at 6pm, from the Downing Street briefing room.

It will be shown live on both BBC News and Sky News.

The final lifting of restrictions is expected to be delayed by four weeks, until 19 July.

This is the start of the final week of term for many schools in England.

All legal limits on social contact had been set to lift on 21 June, meaning venues like nightclubs could reopen and large events like festivals could go ahead.

The Prime Minister is expected to present a package of measures to “sweeten” the disappointment of a delay to what many had dubbed Freedom Day.

This could include lifting the 30-guest limit on wedding receptions and pledging more mass events over the summer.

Mr Johnson had also looked at a shorter two-week delay after hearing arguments that a month would impose further damage to the economy, including the embattled hospitality industry, particularly during the Euro 2020 tournament when pubs would normally be full of fans.

If hospital admissions reduce dramatically between now and 5 July, there is a possibility of bringing forward the final date.

More than 50,000 Covid cases were recorded last week, and while the number of patients in hospital with the virus is far lower than during the January second wave, they are increasing steadily.

Scientific advisers believe the link between cases and hospitalisations has been severely weakened by the vaccines roll-out, which is showing up in the data.

Nearly 57 per cent of the adult population have had both doses of the vaccine, and each two-week delay to the roadmap would allow a further five million people to receive their second jab.

Uliphone launches the new A7 tablet

Lockdown 2021 What lockdown restrictions are lifting in England on 29th March?

Boris announcement 2020 What time Boris Johnson’s tier 4 press conference is today. and how .

Tier 4 2020 Covid tier 4. what are the new restrictions for London and south.east .