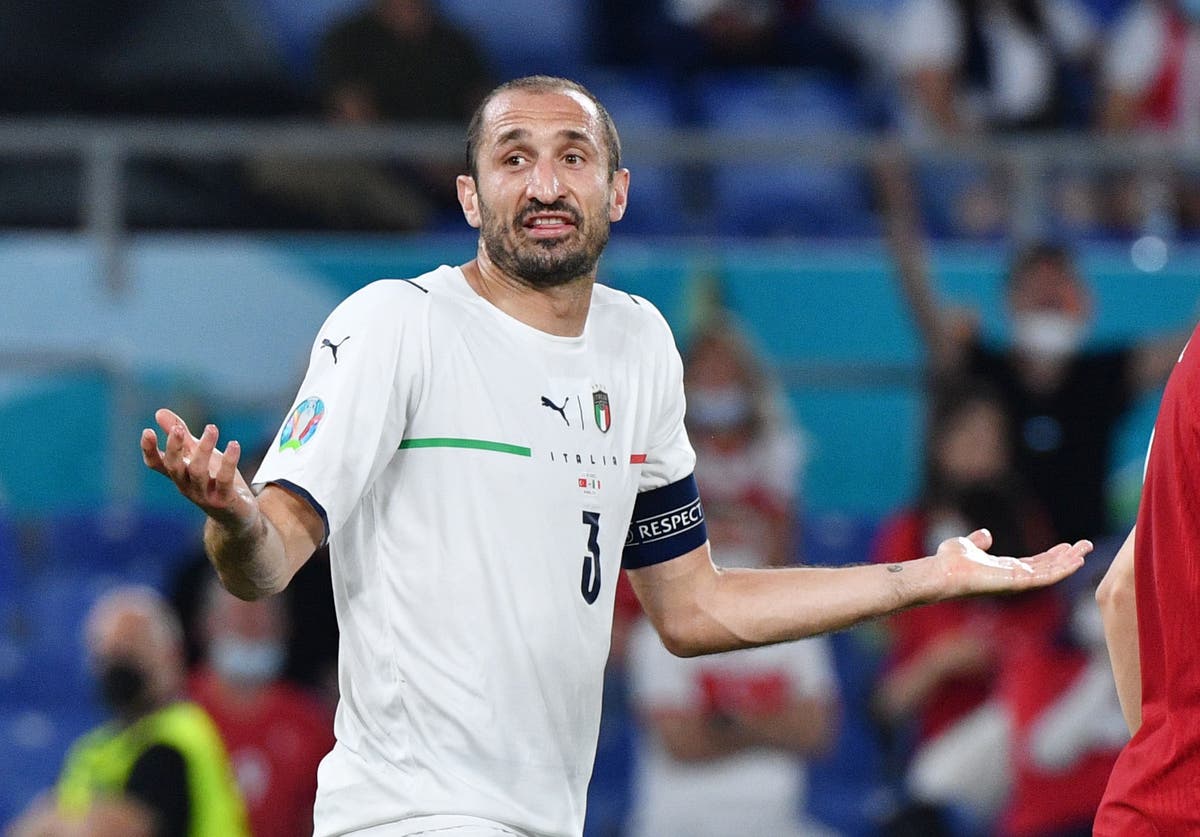 Italy took control right from the get go. They’ve had more than two thirds of possession and 14 shots in the first half. Turkey haven’t been able to transition from defence into attack. They had a brief moment when Burak Yilmaz looked to be in on goal but he couldn’t make use of the chance.

45 mins: Goalless then at the break. Italy have been the dominant side but they haven’t been able to get through the steadfast defence of the Turkish backline.

44 mins: A reminder that VAR is in operation during this tournament as Italy have another penalty appeal turned down. Spinazzola gets to the byline on the left hand side and weaves into the box. He crosses the ball and it strikes Okay Yokuslu’s hand as he attempts to make the block. Yokuslu is about two-yards away from Spinazzola as he strikes the ball and has no chance to get out of the way. That’s also the view of the VAR who tell the referee to play on.

41 mins: It’s some last ditch stuff from Turkey who have nine of their 10 outfielders in their own box defending. Spinnazzola attempts to find room for a cross but is forced back. Italy retreat a little to draw Turkey out and it works. Immobile finds a pocket of space in the box and receives the ball. Turkey scramble back but can’t stop the low shot at goal. It doesn’t matter though as Cakir comes to the rescue once again.

36 mins: Lovely play from Italy to create another shooting opportunity. Giorgio Chiellini comes up from the back carrying the ball and passes it to Lorenzo Insigne on the inside left. He shifts the ball onto his right foot and the Turkish defenders don’t close him down. He rolls the ball to the front edge of the box and hits one in between the centre-backs. Cakir sees it coming and watches the ball safely into his own hands.

33 mins: Another half chance goes begging for Italy. Berardi receives the ball on the left side of the pitch, just wide of the penalty area. He swings in a decent cross and picks out Immobile. Immobile has to drop away to reach the ball but manages to fire off a headed effort that goes wide of the near post.

30 mins: Half an hour gone in the opening fixture of Euro 2020 and still no goals. It’s been a lively affair though with a couple of half chances for Italy. Turkey attempt to respond to Italy’s dominance with a long ball up to Burak Yilmaz but he just drifts offside and the ball is given back to the Italians.

27 mins: Italy’s press is working well for them as they manage to win the ball back high up the pitch. Nicolo Barella slips a pass into the right side of the box where it’s picked up by Domenico Berardi. He chips it into the middle but Okay Yokuslu is back for Turkey and he heads the ball away.

24 mins: Italy almost have the opener after they win a corner. The set piece is swung into the area and Giorgio Chiellini breaks off his marker and wins the header. He directs it at goal and the ball looks to by dipping just underneath the crossbar but Ugurcan Cakir gets a hand to it and taps it over the bar!

21 mins: Things are hotting up out there. Ciro Immobile gets his first sight at goal from the front edge of the Turkey penalty area. He sets himself and belts one at goal with his right foot. Caglar Soyuncu jumps in front of the shot and the ball strikes his hand! Italy desperately want a penalty but they don’t get one.

Find out about the health status of Eriksen