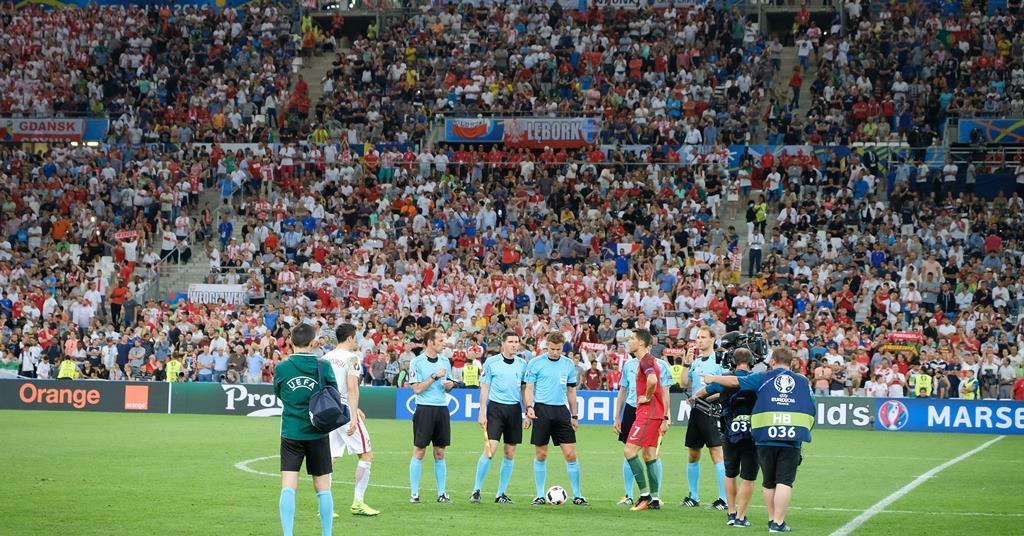 For broadcasters like the BBC, it’s proving to be a hugely challenging event to cover. BBC TV Sport executive producer Phil Bigwood, who has led coverage of major football competitions for the broadcaster since 2002, says he has never known an event like this. “We’re being thrown things on a daily basis that we’ve never had to consider before.”

Covid-19 was always going to be a major issue to deal with for broadcasters covering Euro 2020. But the situation has been made even more difficult by the unique nature of this year’s competition.

Bigwood: Using technology to bring the fans closer to Euro 2020

Back in 2012, UEFA announced that the tournament was to be hosted in several nations as a “romantic” one-off event to celebrate its 60th “birthday”. There are 11 different venues for Euro 2020 – ranging from Baku and Bucharest through to Glasgow, London, Munich, Rome, Seville and St Petersburg.

At a time when international travel is largely prohibited, the multi-venue nature means that the BBC’s coverage is largely being produced remotely.

Rather than traveling to games, most of the BBC’s presentation and commentary of Euros 2020 will come from Dock10 studios in Salford. Gary Lineker, Gabby Logan, Eilidh Barbour and Mark Chapman are all leading on the BBC’s Euros presentations.

The BBC originally intended to present some of the biggest games from European venues, but these plans have been scaled back in light of Covid.

On the plus side, seven games are being played at Wembley Stadium in London and four at Hampden Park Stadium in Glasgow, so the BBC will be able to present and commentate from these venues.

These include England’s opening game against Croatia on Sunday 13 June and Scotland’s opener against the Czech Republic on Monday 14 June. The semi-finals on 6 and 7 July and the finals on Sunday 11 July also come from Wembley Stadium. (The BBC shares Euro 2020 rights with ITV, and coverage is split between the two broadcasters – see box).

“There is an awful lot of paperwork to deal with…It’s fair to say that email traffic has gone through the roof,” Phil Bigwood, BBC

For Wales’ opening game against Switzerland on Saturday 12 June, the BBC has managed to fly a small team out to Baku in Azerbaijan to commentate and report on the game. As an indication of how up-in-the air some of the planning for Euro 2020 is, the travel arrangements were only confirmed about a week before the match was due to take place.

Coverage of all Euro 2020 games, including those in the UK, will be relayed to the BBC’s Salford base via UEFA’s international broadcast centre (IBC) at the Expo Haarlemmermeer in Vijfhuizen, near Amsterdam. The BBC has a small team there to ensure that it has access to the match feeds and additional UEFA content around Euros 2020.

The BBC itself has created a new set – which combines virtual and physical elements – at dock10 for its Euros 2020 coverage. The virtual set has been built in the same studio that the BBC uses for its Match of the Day coverage, and will be used in the future as the basis for its new look presentation for football for the 2021-22 domestic season. The BBC will also use the galleries at dock10 for its Euros 2020 coverage.

Bigwood says Covid-19 safety protocols have been at front of mind throughout the planning for the event, particularly around testing and social distancing. Adding another layer of complexity is the fact that some of the BBC’s presenting talent are coming in from overseas, and they possibly need to quarantine before the competition kicks off. “There is an awful lot of paperwork to deal with,” admits Bigwood. “It’s fair to say that email traffic has gone through the roof.”

Read more: UEFA goes remote at scale: Behind the scenes of Euro 2020

Things may become easier after 21 June, when the UK’s remaining social distancing restrictions are due to start to ease. The hope is that travel to and from more countries will open up too, with more destinations classified as green on the UK’s traffic light system for international travel. However, concern about the spread of the Delta variant of Covid-19 that originated in India could push back lockdown easing dates. “We’ll carry on with the remote plan until things change,” says Bigwood.

Major live events like Euro 2020 often see broadcasters showcase new technology, as the BBC did for the 2018 World Cup by offering all games in virtual reality.

Given the challenges of producing Euro 2020, the priority for the BBC, says Bigwood, is getting the event on air. That said, fans will be able to experience the Euros in Ultra HD quality live on BBC iPlayer, as part of a trial from the BBC.

Viewers with compatible TVs and a high-speed internet connection will be able to watch 22 of the BBC’s games in UHD and High Dynamic Range, including the first games in the competition for Wales, England and Scotland.

All BBC games will be broadcast on BBC One or BBC Two, BBC iPlayer and the BBC Sport website and app. Highlights programmes and selected match replays will be available most evenings on BBC One and BBC iPlayer.

Talking football: Most of the BBC’s presentation and commentary will come from Dock10 studios in Salford

Beyond TV, the BBC is also focusing on its radio, digital services and social media. Twitter will be its home for in-play updates and breaking news. BBC Sport’s YouTube channel will feature highlights of every Euros game, while its Facebook page will deliver a mix of news stories, imagery and video – including match action to followers.

The BBC will also showcase key moments in a dedicated Snapchat Show and across its Instagram Stories. On TikTok, BBC Sport will aim to bring the lighter side of the Euros to life, with match action sitting alongside the “larger-than-life personalities of our presenters and pundits.”

For the BBC, says Bigwood, it is about “using technology to bring the fans closer to Euros 2020” at a time when many of them will not be able to travel to the games themselves.

Who’s airing the Euros in the UK

The BBC and ITV will broadcast Euro 2020 in the UK.

The BBC will air the opening games of each of the home nations playing in the competition, England, Scotland and Wales.

ITV will show the two subsequent evening England group stage games, which will see the Three Lions take on Scotland at Wembley, as well as the final group match against the Czech Republic on 22 June. During the group stage, ITV’s coverage will also include Wales v Italy and Scotland v Croatia. The BBC will show Wales’ group fixtures against Switzerland and Turkey.

The BBC will have first and second pick of the games at the round of 16 and quarter-final stages meaning if home nations progress, the BBC will be the place to watch them. ITV will have the first pick of the semi-finals. Both BBC and ITV will show the final.

UEFA Euro 2020 was always going to be a logistical exercise given the tournament’s pan-continent, 51-match, 4-week schedule, but nothing will surely be as tricky as this edition, which was delayed by a year.

Michaela Coel picked up the best actress award at Sunday night’s Bafta TV Awards, also winning awards for writing and directing her drama I May Destroy You.

Optimising the potential of edge computing and responding to the “dramatic ramping-up” in demand from media and communications customers are among the present priorities for Robert Courteau, general manager of Kontron’s communications business, writes David Davies

Sinead Greenaway took an unconventional route to her role as chief technology and operations officer at UKTV, where she has led a technology transformation at the UK broadcaster.

After a majorly disrupted 2020, production in the UK looks to be well and truly back on track and Twickenham Studios, led by managing director Cara Sheppard, is keen capitalise.

From death to honor 2021 Eriksen’s heart beats with football

Euro 2020 Italy convincing in 30 win over Turkey to open