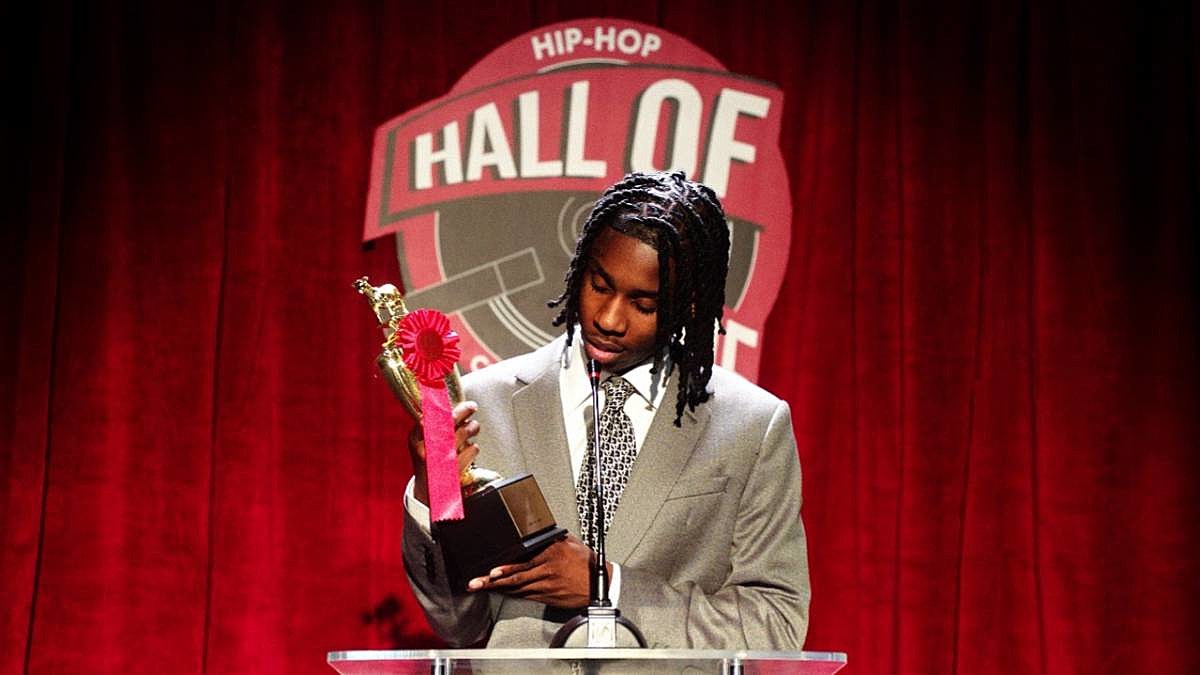 It seems like every week there's more good news about the comeback of live music, and this week brought a very big announcement: Madison Square Garden will host a full-capacity concert in less than two weeks (with the Foo Fighters). And there continue to be more and more tour announcements.

Also: we added tons of new records to our store this week.

Read on for my picks. What's your favorite release of the week?

Polo G may still be an unknown name to those who don't keep up with the fast-moving rap mainstream, but the 22-year-old, Chicago-bred rapper already feels like a vet. Hall of Fame is his third album in as many years, following his instant-breakthrough 2019 debut Die A Legend and 2020's The GOAT, and it's also his first album since his single “Rapstar” sat atop the Billboard Hot 100 for two weeks straight. He'd been on the rise since day one, but Polo G wasn't really a rap star until “Rapstar,” so even though Hall of Fame is Polo's third album, it's likely gonna be an introduction for many. It arrives with more eyes on Polo G than ever, and it delivers. As Polo promised in recent interviews, Hall of Fame has a little something for everyone. It's loaded with the kinds of somber, melancholic sing-rap songs that have become Polo G's trademark, but it's also got some more traditionally hard rap songs (like recent single “GNF [OKOKOK]” and “Clueless” which features the late Pop Smoke), danceable pop (“For the Love of New York” with Nicki Minaj), and more. And there are way more big-name guests on Hall of Fame than any previous Polo G album — not just Nicki Minaj and Pop Smoke but also DaBaby, Rod Wave, Roddy Ricch, Lil Wayne, Young Thug, G Herbo, Lil Durk, and more — and the guests only add to the album; they never over-crowd it or take away from Polo G's own distinct style. There's a nice amount of variety in the production too, with plenty of songs fueled by atmospheric electronics and a handful of others fueled by gently-plucked guitars. At a glance, Hall of Fame looks and sounds like a typical radio-rap album, but the deeper you dig, the more it feels like a Chicago drill version of intimate bedroom pop. It's a mournful, personal album with a lot of depth to it.

Sleater-Kinney's last album, 2019's The Center Won't Hold, saw the band working with St. Vincent as a producer and going in a more experimental art rock direction than ever before. It was the most drastic departure from their classic sound yet, and it was their last album with longtime drummer Janet Weiss, who quit Sleater-Kinney after its completion, saying “the band is heading in a new direction” and later adding “the new record was sort of made without me.” For Path of Wellness, the band's first album since Janet's departure, Corin Tucker and Carrie Brownstein handled production themselves and they largely return to Sleater-Kinney's trademark skeletal guitar rock. Even without a permanent drummer to anchor them (they enlisted in the help of a few different ones to record it), the duo's singing/songwriting styles, harmonies, and guitar heroics are as unmistakable as ever. If you heard the singles, you probably have some idea of what to expect, but most of the album's biggest standouts aren't singles. The most immediate song on the record is the anthemic, post-punky “Favorite Neighbor,” and the most stunning songs are the ones where Sleater-Kinney let their classic rock flag fly: the dusty “Shadow Town,” the psychedelic “Tomorrow's Grave,” and the Fleetwood Mac-y album closer “Bring Mercy.” It's moments like those that remind you that — even with so much changing for Sleater-Kinney at once — Carrie and Corin's chemistry remains a constant.

We sold out of 'Path of Wellness' but you can pick up some Sleater-Kinney classics in our vinyl shop.

Wristmeetrazor's sophomore album Replica of a Strange Love breaks down barriers between genres in a way that very few bands in heavy music are doing right now. It treks through At The Gates-ian metalcore riffs, atmospheric Deftones hooks, bellowing goth metal, hints of '90s Nine Inch Nails and other industrial bands, and a whole lot of other stuff, and it blends it all together in a way that feels natural and innovative. It's heavier and weirder and catchier than anything they'd done before, and you can read much more about it in our recent feature, for which we interviewed vocalist Justin Fornof and producer Isaac Hale (of Knocked Loose).

AFI got lumped in with the pop punk and emo explosions when they released their 2003 major label debut Sing the Sorrow, and like a lot of popular bands from that era, they're often looked at as a “nostalgic” thing now. But unlike a lot of those bands, their mainstream breakthrough was their sixth album. AFI put out plenty of good music before that album, and they've continued to release good music since then too. Recent releases like 2017's AFI (The Blood Album) and the 2018 EP The Missing Man have found them settling into an appealing late-career comfort zone, and the new Bodies just might be their best “late career” LP yet. Ever since their 1998 EP A Fire Inside, AFI honed in on a sound they could call their own, a very original mix of the Misfits' horror punk and The Cure's goth rock, both of which they covered on that EP. These days, they're leaning a little more into their Cure/goth side than their punk side, which suits a band 30 years into their career. Not that there's anything wrong with playing punk forever, but it makes sense that they'd tone down their punkiness over time.

Davey Havok doesn't really yell and scream anymore, but when it comes to making their own unique version of '80s goth, AFI still know how to make snappy, punchy songs that don't sound like any other band. And all four members of this band have still got it. Davey's voice soars as much as it did on the band's biggest hits, Jade Puget's guitar work is still razor sharp, Hunter Burgan's basslines are still driving and powerful, and Adam Carson's drumming is as subtly effective as ever. And Bodies is the most consistently rewarding batch of songs AFI have released in at least a decade. They may not be as world-conquering as they were when their hits were all over MTV, but they've written an album that scratches the same itch as those hits and has nary a weak link. Not a small feat for LP11.

Pick up 'Bodies' on tri-color vinyl (and a couple AFI classics) in our store.

Jesse Royal has spent the past decade carving out a space for himself within the current “reggae revival” movement, and though he's never gone a year without releasing music, he's only just now getting around to putting out his second full-length album, the followup to 2017's very good Lily of Da Valley. The new album is called Royal, which, as Jesse explained in an interview with Reggaeville, is more than a reference to his last name. “[It's about] regaining the kingly side of we story, not just attaching ourselves to the idea of 400 years of slavery, identifying ourselves with bigotry or some people and perspectives that are first of all ignorant and then second of all not true. We don't have to own labels put on us by other people, the whole royal thing is just to remind the youths dem of our story. We are kings and queens, not former slaves.”

The essence of that title is also reflected within the music, which is conscious but celebratory. And the message in the songs is matched by equally powerful music. Aided by an impressive cast of guests that includes Protoje, Runkus, Vybz Kartel, Stonebwoy, iotosh, Natural High, Koffee collaborator Sean Alaric, and more, Royal offers up razor-sharp grooves, glistening atmosphere, triumphant horns, and an arsenal of catchy hooks. Like most of the current “revival” stuff, Jesse pulls obvious influence from the roots era, but he also incorporates hip hop, electronic music, and other modern sounds. It blurs the line between retro and futuristic, and it's an instantly-satisfying album that just hits harder with each listen.

KennyHoopla follows his 2020 electronic-emo-dance-punk EP how will i rest in peace if i'm buried by a highway?// with a mixtape that he made entirely with blink-182's Travis Barker. This one finds him channelling the kind of Y2K-era pop punk that Travis helped pioneer, but Kenny's got a fresh perspective and this mixtape is some of the best stuff to come out of the current mainstream pop punk revival. You can read my full review here.

Atlanta screamo/hardcore band Slow Fire Pistol (ex-Dead In The Dirt, Foundation) followed their killer 2020 split single with Portrayal of Guilt with this new EP, released on Triple B. It's great stuff, and you can read more about it here.

After many garage-psych albums, a metal album, and more, King Gizzard & The Lizard Wizard have now gone the way of Tame Impala's Currents and made a synthy, modern-sounding psych-pop album. They do it well, and you can read Bill's review for more.

For even more metal, browse the 'Upcoming Releases' each week on Invisible Oranges.

And check out what's new in our shop.