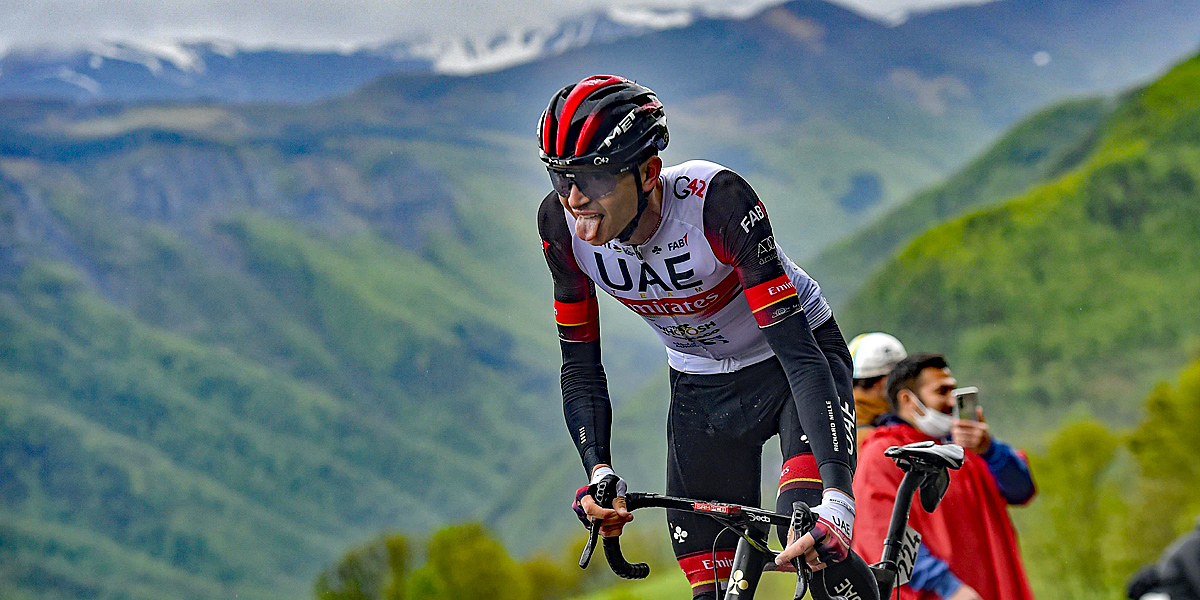 Giro d'Italia: De Marchi in the pink as Dombrowski takes stage four Wed, 12 May 2021 00:00:00 +0100-UAE Team Emirates' Joe Dombrowski fought through the rain to win the stage. Alessandro De Marchi came in just behind to take the pink jersey.

Giro d’Italia stage 4: We expected a change on the overall today, but the race was turned upside down on the steep slopes to Sestola. The big break of the day went all the way to the finish and it was UAE Team Emirates’ Joe Dombrowski who fought through the rain to win the stage. Alessandro De Marchi came in just behind to take the pink jersey for the Israel Start up Nation. 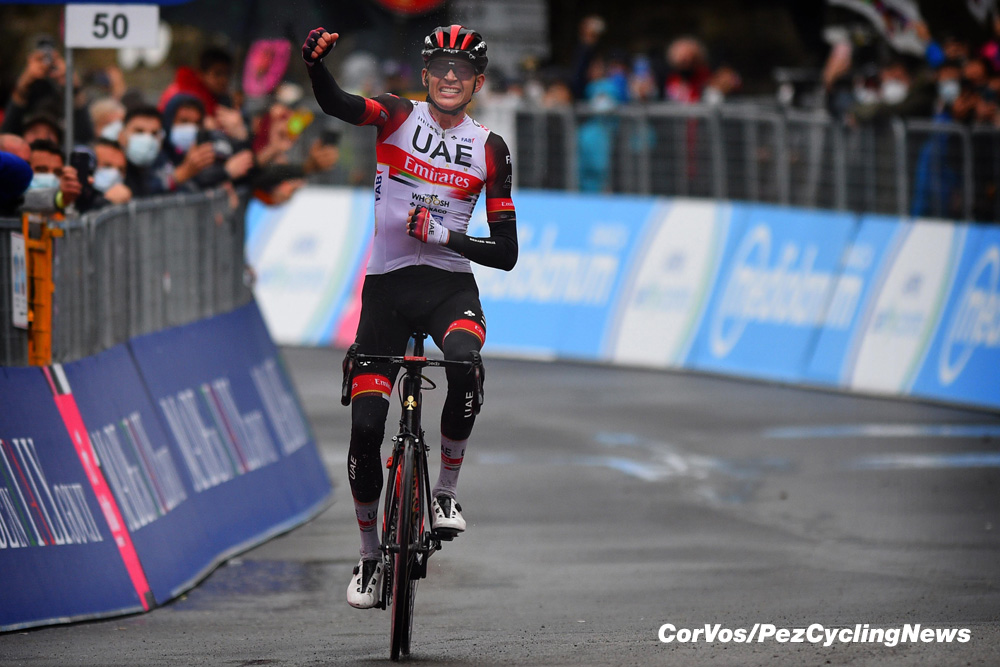 The first serious climbing stage of the Giro d’Italia was won by Joe Dombrowski. After a rainy stage of 187 kilometres to Sestola, the American was the best of a large group of escapees. Alessandro De Marchi came in second and took over the pink jersey from Filippo Ganna. The favourites had their own battle behind: Egan Bernal, Mikel Landa, Aleksandr Vlasov, Hugh Carthy and Giulio Ciccone took time on the others.

A wet start in Piacenza

Giro stage 4 route: The stage is clearly divided into two parts: flat and straight along the Via Emilia, all the way to Parma, wavy and technical afterwards. Past Parma, the route takes in a brace of ascents (including two categorised climbs), with gradients exceeding 10% at points, on relatively narrow roads. Past Montecreto and Fanano, the route takes in the Colle Passerino climb, which ends at 2 km out. The last 6km are very demanding. Starting in Fanano, the Colle Passerino climb runs on a narrow roadway, with gradients exceeding 10% over extended stretches, and lengthy peaks topping out at 13-14%. At the 2km mark, the road descends for approx. 800 metres and then rises again with easy gradients.

Victor Campenaerts (Qhubeka ASSOS) and Quinten Hermans (Intermarché-Wanty-Gobert) were the first to attack. Several riders from the peloton tried to cross, but they couldn’t escape. As a result, the gap remained around 25 seconds for a long time. After 30 kilometres, a successful chasing group formed. 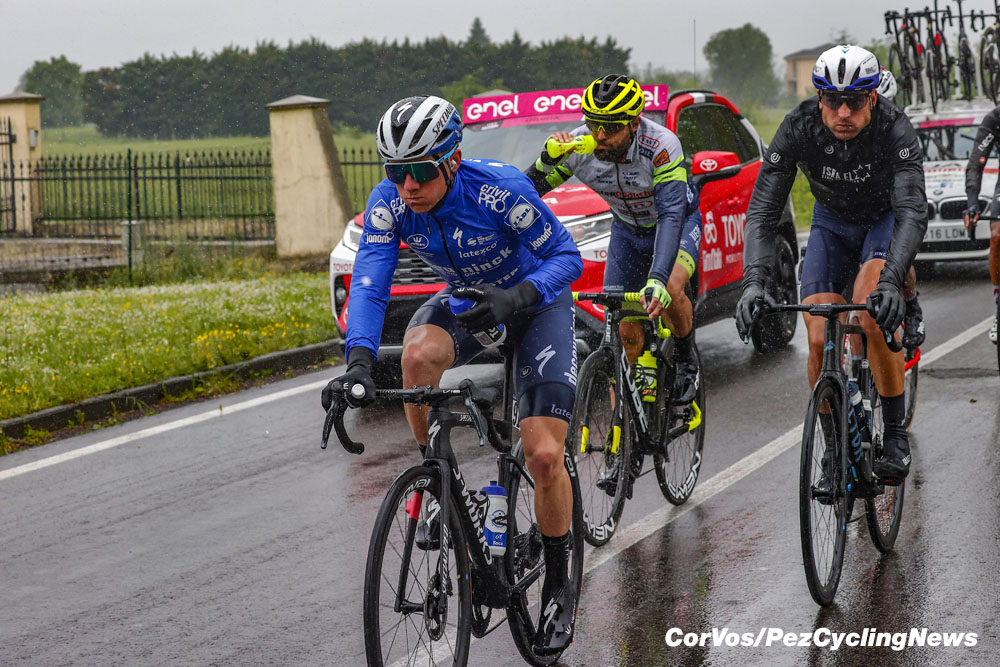 Big day ahead for Evenepoel

Oss in the rain 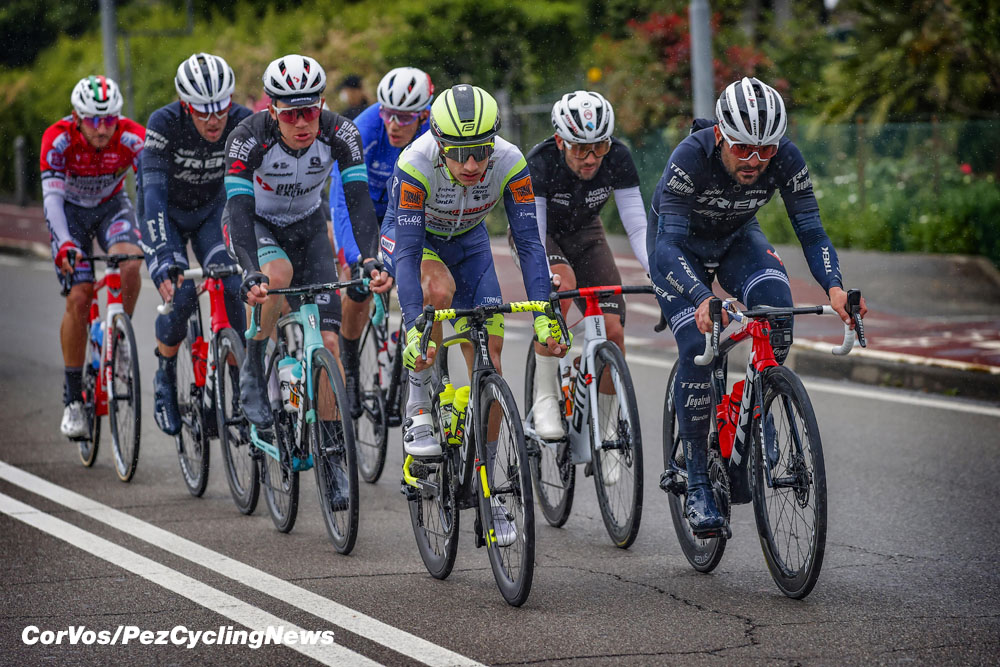 The leading group took a 6 minute lead, after which Astana-Premier Tech and INEOS Grenadiers started to work on the front of the peloton. Overall leader Filippo Ganna was the man who did the lead work and kept the difference around 5 minutes. On the first climb of the day, the Castello di Carpineti, Francesco Gavazzi took the mountain points, but on the descent three broke away from the leading group. Juul-Jensen, Hermans and Taaramäe drove away in the pouring rain and quickly had a minute on their pursuers.

The break soon had 6 minutes

With a lead of more than a minute on the pursuers and 6:30 on the peloton, the three leaders started on the Montemolino, where they extend their lead. This move made Hermans (at 0:53 on Ganna) the virtual wearer of the pink jersey, followed by Taaramäe at 0:57. Juul-Jensen, at 10:20 overall, left the work to the Intermarché-Wanty-Gobert men. 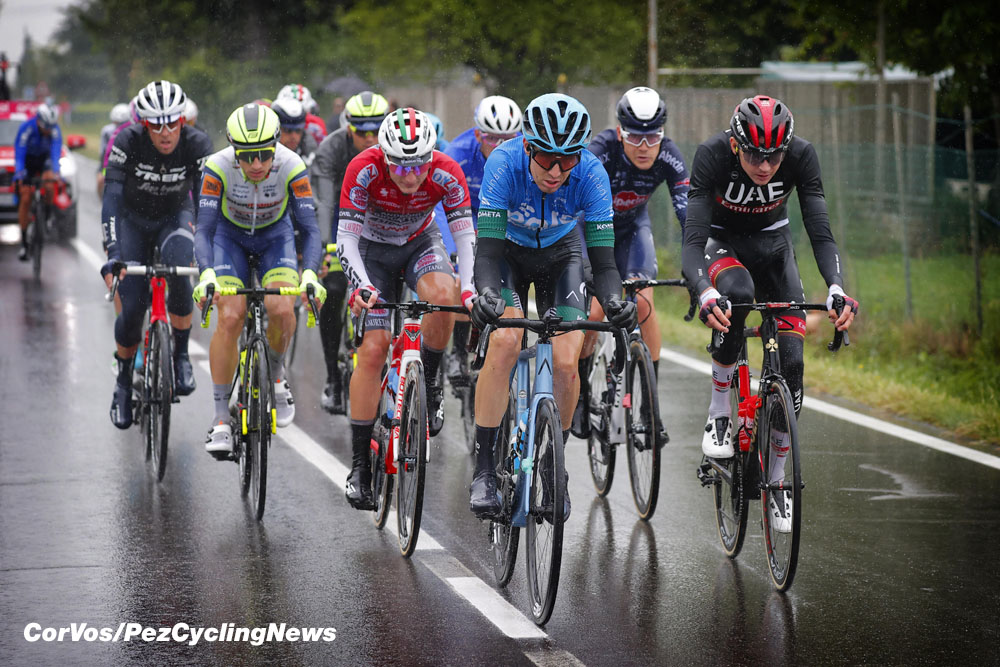 The big break of 25 riders

Just before the top, on the steepest part of the Montemolino, Hermans was dropped. Taaramäe was over the top for the mountain points, ahead of Juul-Jensen. The first pursuers managed to make up part of the gap on the climb. The peloton took it easy and, led by Deceuninck – Quick-Step, came up almost 8 minutes behind. Bahrain Victorious lent a hand and caused splits in the peloton on the wet descent.

Not the best of days

20 kilometres from the finish, the uncategorised Montecreto climb was waiting. The leading duo retained their lead of more than a minute on the second group, including Vervaeke, Oliveira, De Marchi, Dombrowski and Mosca. With a lead of 1:05, Taaramäe and Juul-Jensen started the final climb to Colle Passerino (4.3km at 9.9%), 6.7 kilometres from the finish. The two saw the chasers getting closer and closer. 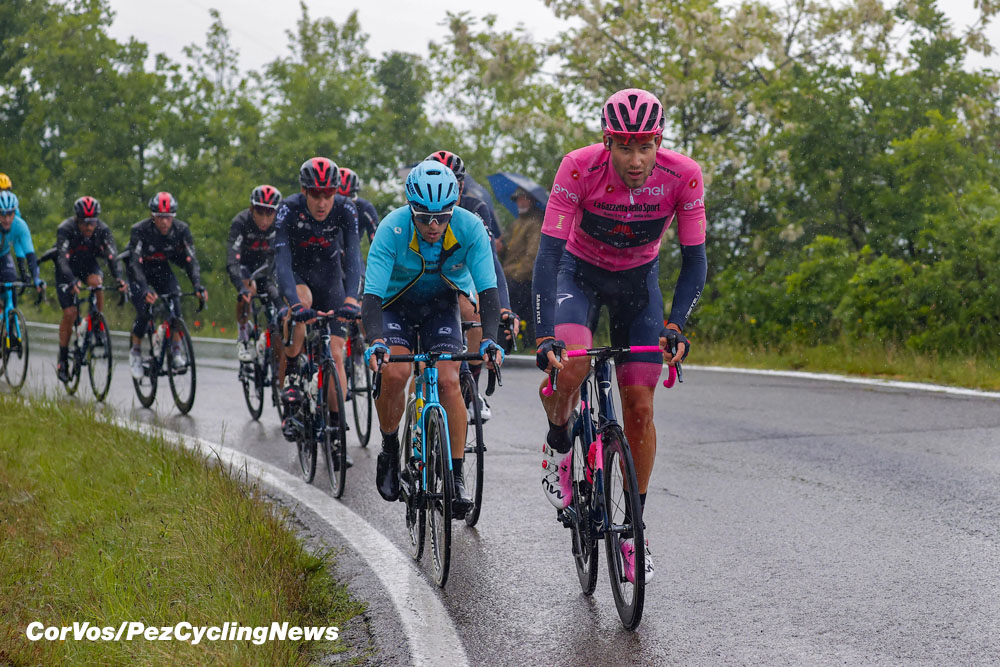 De Marchi proved to be the strongest of the chasers and rode his companions off the wheel one by one. Only Dombrowski could follow the Italian, after which they joined Taaramäe and Juul-Jensen at 4 kilometres from the finish. Dombrowski then went solo on the steep ramps. De Marchi had to pull out all the stops, but cracked with 3.5 kilometres to go. The Italian still had the pink jersey to fight for.

Not too many cowboys in these parts

Dombrowski had a lead over the top, taking the KOM jersey, and went solo in the last lumpy 2.5 kilometres towards Sestola. He kept his lead over De Marchi and took the stage victory. De Marchi followed shortly behind and captured the pink jersey. Filippo Fiorelli finished third, ahead of Louis Vervaeke. 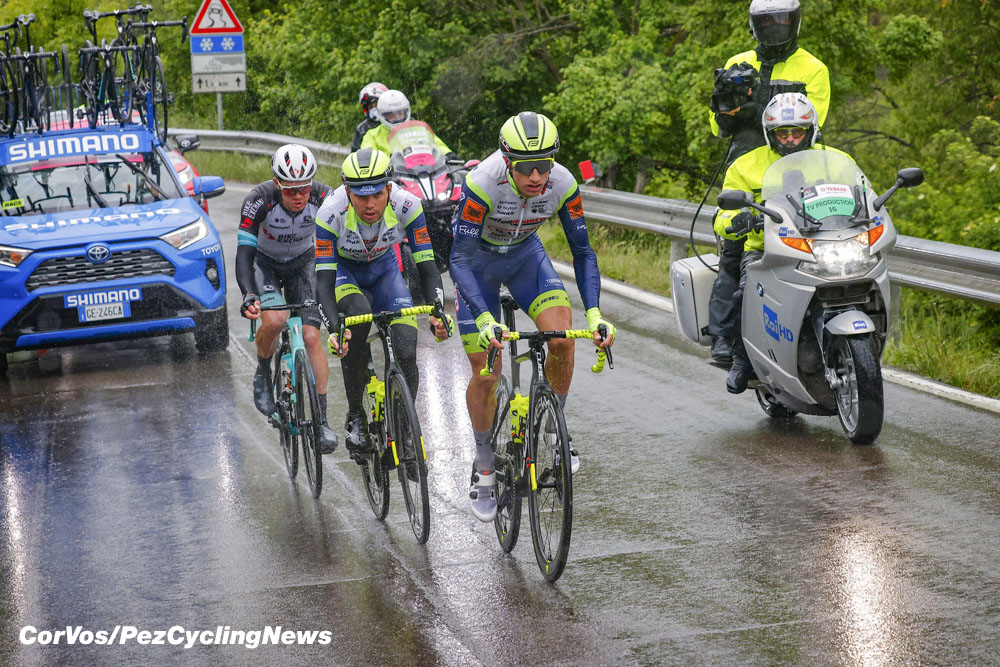 Juul-Jensen and Taaramae looked to have stage 4 in the bag, but…

The peloton of the favourites started too late for the stage victory, but came closer and closer due to work by Bahrain Victorious and Deceuninck – Quick-Step. Tobias Foss was one of the first to be dropped at the foot of the Colle Passerino and João Almeida, fourth overall, also had a bad day. The Portuguese rider couldn’t hold on, as did Fausto Masnada and George Bennett later on the final climb. 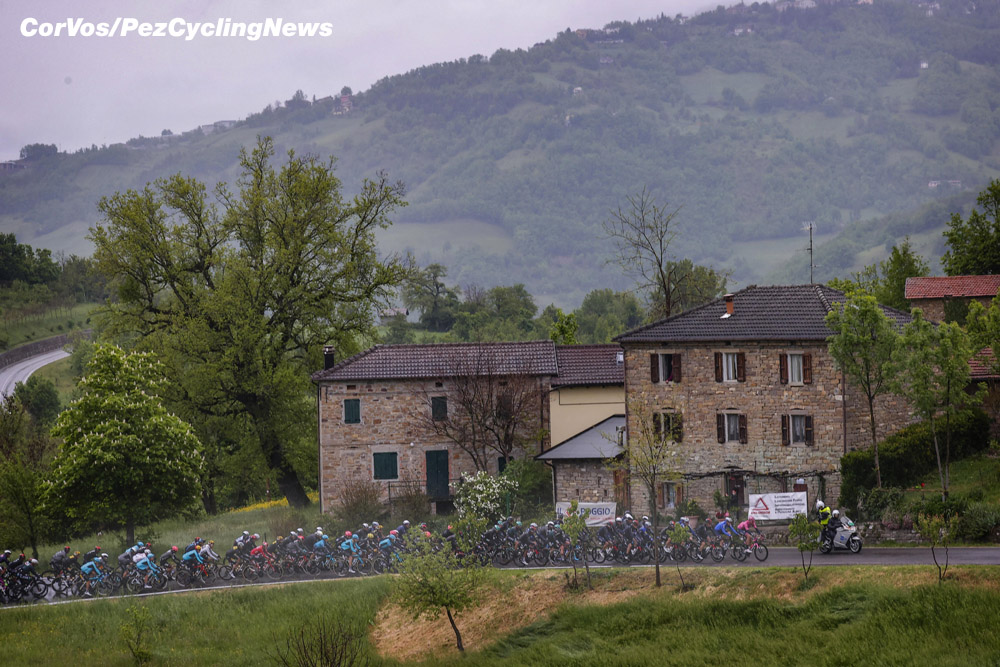 Eventually Ganna had to say goodbye to the pink jersey

Dombrowski held back and then went for the win

There was a strong attack from Giulio Ciccone, followed by a jump from Mikel Landa. That in turn prompted a reaction from Vlasov and Bernal. The Colombian crossed to Landa and Ciccone, after which Hugh Carthy and Vlasov also joined. They were chased to the finish in Sestola by a group with Evenepoel and Yates, who crossed the finish line 11 seconds behind. The big losers among the GC riders were George Bennett and João Almeida. Bennett lost more than 4 minutes on the rest of the top men. 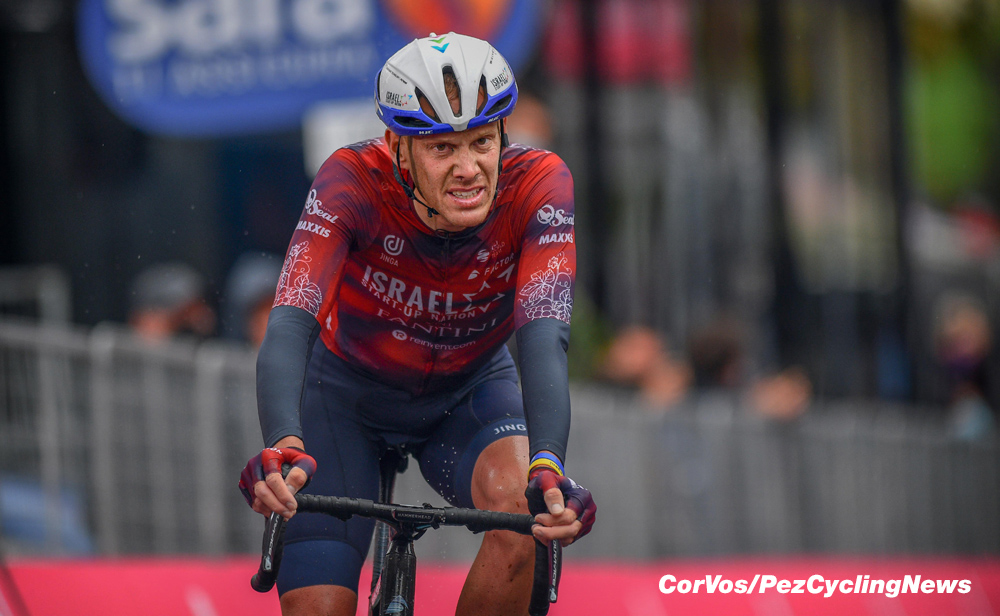 Second on the stage, but pink jersey for De Marchi

Bernal brought in the favourites

Stage winner, Joseph Dombrowski (UAE Team Emirates): “It was a hard day, I wasn’t sure the breakaway could make it but when I saw that we had 6-7 minutes from the peloton, I started to believe in it. In the last few kilometres of the climb I felt good, so I decided to attack and it paid off!”

Maglia Rosa, Alessandro De Marchi (Israel Start up Nation): “I started thinking about taking the Maglia Rosa two days ago but I didn’t tell anybody. Today it was about finding the right move. I knew it would be tricky at the start. A bit of luck helped and here we are. I’m lost for words. The Maglia Rosa is the childhood dream of every cyclist, especially for an Italian.” 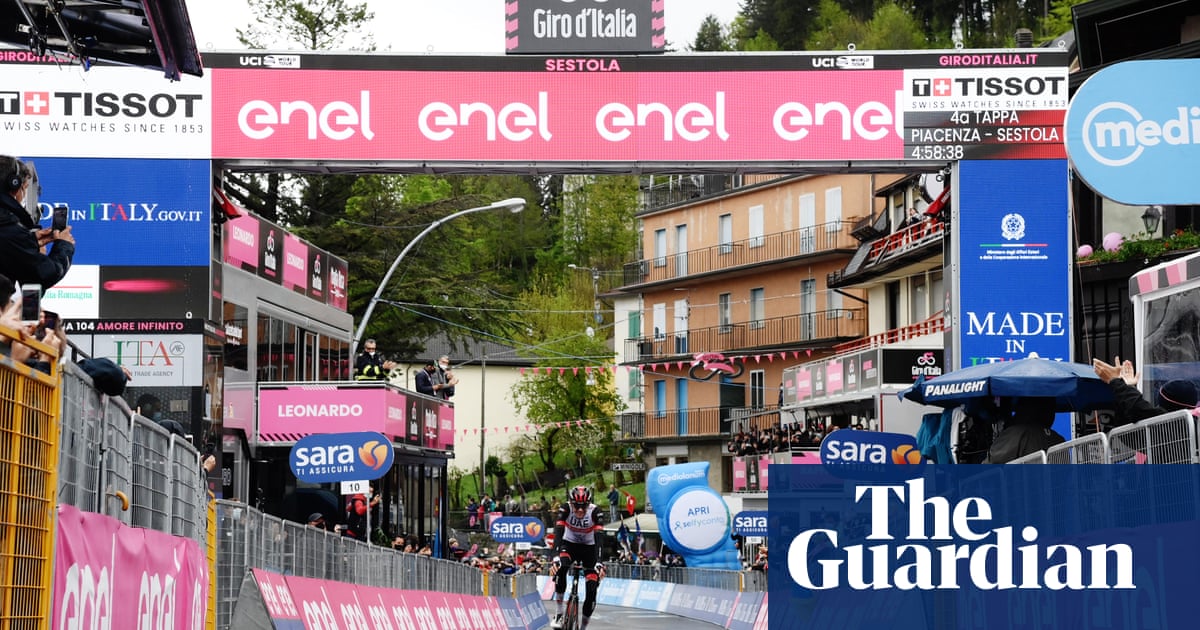 American rider Joe Dombrowski won stage four of the Giro d’Italia as Alessandro De Marchi took the pink jersey, but Simon Yates lost ground in the battle of the main favourites behind.

Dombrowski took his first Grand Tour stage win as the UAE Team Emirates rider attacked out of the breakaway at the end of a 187km stage from Piacenza to the ski station in Sestola, raced in wet, cold and windy conditions. But as the main peloton followed up the final climb, Yates was distanced by a small group including Egan Bernal, Hugh Carthy and Mikel Landa – conceding 11 seconds.

“I’m really happy with today,” said Dombrowski. “I knew De Marchi was probably the strongest rider in the break so I knew if I stuck to his wheel I would be in a good spot.” Dombrowski took victory by 13 seconds from Israel Start-Up Nation’s De Marchi, who now has a 22-second advantage over the American in pink.

“The goal was the maglia rosa,” said De Marchi. “I started thinking about it two days ago but I didn’t tell anybody. I knew this was a day when a good move could go … then it was about a bit of luck and here we are – I’m without words.”

Landa sparked the late attacks in the group of main favourites, quickly joined by Bernal, Carthy and Aleksandr Vlasov as they built a small advantage over their rivals. Carthy is now up to 10th, 1min 38sec off pink, one second ahead of the Ineos Grenadiers’ Bernal. Yates sits 16th, 1min 49sec down on De Marchi.

Art stars are in solidarity with Sheikh Jarrah neighborhood 2021 What did they say?