After falling behind to Christian Pulisic's opener, the 13-time champions of Europe were dragged back into the semi-final tie by their French forward

After a remarkable week in which Real Madrid president Florentino Perez tried to change the future of football, it took a brilliant goal from Karim Benzema to snap los Blancos back to reality on Tuesday night and remind them that there is plenty to fight for in the present.

The Frenchman’s brutal strike past Edouard Mendy earned Madrid a 1-1 draw with Chelsea in a sodden Champions League semi-final first leg clash at the Alfredo Di Stefano Stadium, after the Blues had started the game at a pace that left the home side trailing.

Dark, foreboding skies over Valdebebas warned Madrid that this would not be easy. The football world poured cold water over Perez’s planned European Super League, and the heavens opened to do the same to his team. This wasn’t the kind of 'making it rain' that the Madrid president had been hoping for when he launched his pet project.

Madrid have shown plenty of swagger in 2021, most impressively of all in their 3-1 win over Liverpool in the last eight but, in recent weeks, their workload has taken a toll on them.

With over 50 injuries this season, Zinedine Zidane has been left with a threadbare group at times, and key players have not been able to rest.

Madrid were leaden-footed in the opening stages of their first appearance in the Champions League semi-finals in three seasons, with Chelsea’s midfield dynamo N’Golo Kante running rings around Zidane’s feted midfield trio of Luka Modric, Casemiro and Toni Kroos.

Injured captain Sergio Ramos had tried to gee his team-mates up in the tunnel before the game, but it didn’t seem to be working. They picked up where they left off in the turgid goalless draw at Real Betis on Saturday.

Only the superb Thibaut Courtois stopped the Blues from breaking the deadlock, when he made a stunning save to deny Timo Werner from close range.

Ahead of the game it was his ex-Chelsea Belgian compatriot Eden Hazard who occupied column inches, but Courtois has been Madrid’s best player this season, bar one – Benzema.

The Frenchman dragged Madrid into the game by the scruff of their neck, after Christian Pulisic opened the scoring by rounding Courtois, with the home defence half asleep.

Antonio Rudiger’s ball over the top was well-placed and well-weighted but Raphael Varane was slow to react to it and Pulisic was left with yards of space to work his magic.

Benzema slapped the post with a fierce drive from distance and it acted like smelling salt to Madrid, who suddenly remembered they are record 13-time Champions League winners and that they live for this tournament, no matter the actions of their president.

The No.9 levelled with a brilliantly taken goal, controlling on his head in the box and then keeping his balance to emphatically volley the ball past Mendy.

It was Benzema’s sixth goal in this season's Champions League – the most he has netted in a single campaign since 2014-15, and his 71st strike overall, drawing him level with another Real Madrid legend, Raul, in fourth place. Only Cristiano Ronaldo, Lionel Messi and Robert Lewandowski have now scored more goals in this tournament.

After Benzema’s wake-up call, it was a tighter, more even game, even though Madrid failed to trouble Mendy in the second half. They stemmed the bleeding and stopped letting Pulisic and Werner’s pace pick them open.

At times that meant picking up yellow cards, with Kroos and Marcelo both going in the book for fouls on the US international, but with tallies cleared ahead of the semi-final, it was sensible, if cynical, game management from a club that has reached this stage more than anyone else – 30 times, to be precise.

If Perez had got his way, this would also have been the last time, but he didn’t, and we continue as we were.

And so do Madrid, with a decent result to take to Stamford Bridge, given their patchy performance. Ultimately, they had Benzema to thank for shifting the club's focus from Perez's pursuit of a European Super League to the players' bid for a 14th European Cup. 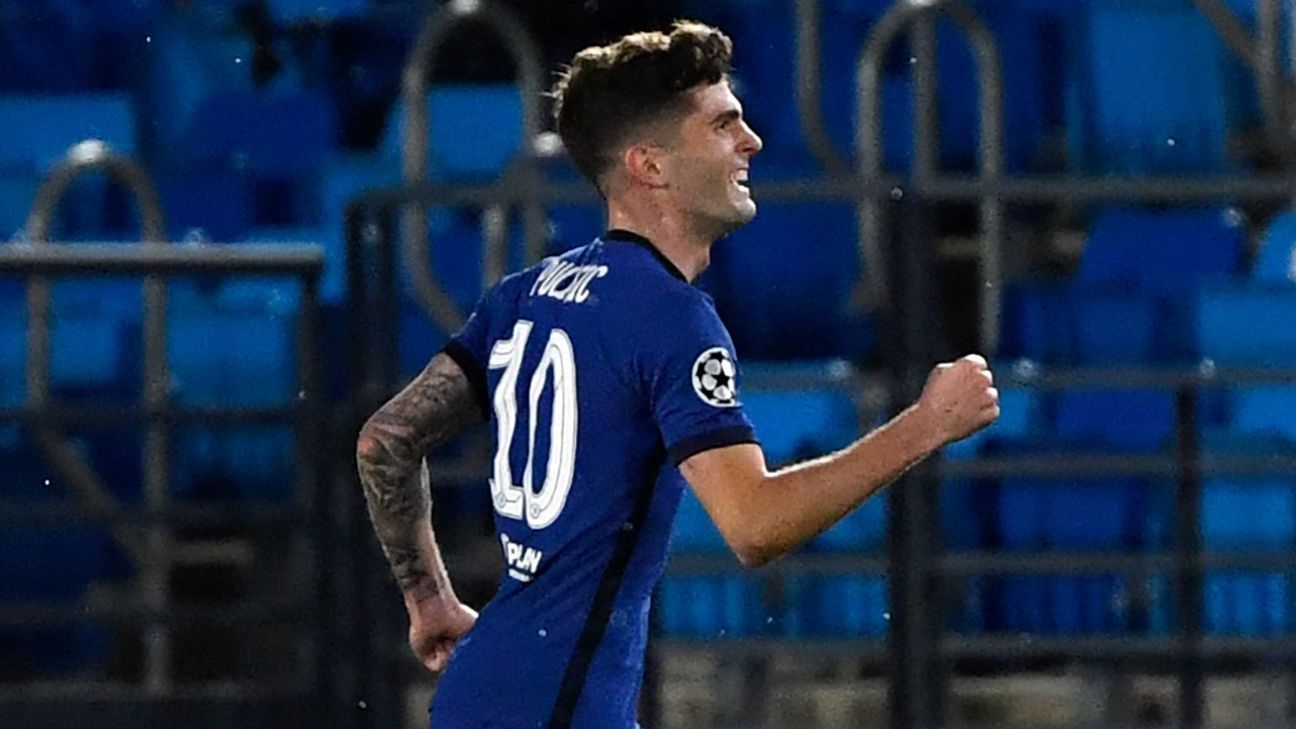 Christian Pulisic became the first United States men’s international to score a goal in a Champions League semifinal after netting in the first half of Chelsea’s 1-1 first-leg draw with Real Madrid on Tuesday.

The goal was also Pulisic’s fifth in the Champions League, moving him ahead of DaMarcus Beasley on the all-time U.S. men’s scoring list in European football’s premier competition.

Pulisic found himself alone in the penalty area on 14 minutes and cut to his right, beating Real Madrid keeper Thibaut Courtois and firing between two defenders to give Chelsea an early lead.

Karim Benzema scored to draw the hosts level later in the first half, leaving both teams with all to play for in next week’s return leg at Stamford Bridge.

After the match, Chelsea manager Thomas Tuchel said: “The goal was well deserved and we should have scored at least one more. We conceded more or less out of nothing and that can always happen against individual quality.

“It was a disappointing score at half-time. We had to stay calm and not lose confidence. The second half was very tactical, you could feel that we are a bit tired. We only had a few days to recover from another tough away game. We have to live with 1-1.”

The 22-year-old Pulisic also scored in the knockout round in 2017 when he was still with Borussia Dortmund and is now the youngest player to score for Chelsea in the semifinals of the UCL or later, passing Ramires, who did it at 25 years old against Barcelona in 2012.

1 – Christian Pulisic 🇺🇸 is the first American player in history to score against Real Madrid in all competitions and the first to score in a UEFA Champions League semi-final. Star pic.twitter.com/6POgjhbZSs

Adding to the list of firsts for Pulisic, he is also now the first U.S. international to score in any competition against Real Madrid.

“It was a great finish, great composure,” Chelsea captain Cesar Azpilicueta said. “He’s an amazing player, he’s a young player, he’s growing and improving. I’m very pleased with his goal because he’s an important player for the team.”

Two U.S. women’s team players have scored in the UEFA Women’s Champions League semis or later already — Carli Lloyd did it in 2017 while on loan with Manchester City, and Alana Cook did it last weekend in Paris Saint-Germain’s 1-1 draw with Barcelona.

Pulisic has battled injuries throughout his career, and Tuchel claimed earlier this month that he needed to learn to trust his body again after dealing with nagging issues dating to a hamstring problem suffered in last August’s FA Cup Final defeat to Arsenal.

Tuchel’s first game in charge took place on Jan. 27 against Wolves, but Pulisic did not start a Premier League game until March 13.

However, the 22-year-old has started six of Chelsea’s past eight matches across all competitions, and he said prior to the Madrid match: “I feel very confident in my body and my fitness level at the moment. I have played a string of games.

“I’ve never thought of myself as a player who is injury prone or anything. Obviously, I had some time out in the past year and a bit. It is really just about taking care of my body and putting myself in the best position to be available for every single game. I feel good about that right now.”

PSG Manchester City dealt with a warning by superstar

Pochettino Tottenham hold talks with Mauricio over return as manager